Imagine a planet that has the consistency of cotton candy. It sounds like a child’s story, but it is not. Read on to learn more about the Super Puff class of planets.

A planet with the gas consistency of cotton candy? Is that real? According to scientists these planets do exist and have the planet class name of Super Puff. Why don’t they call them gas giants? What makes them different from gas giants.

Super-Earths are exoplanets with radii of 1–4 Earth radii and masses of 2–20 Earth masses. These numbers pose a puzzle: this mass range includes cores massive enough that they should trigger runaway accretion and result in the formation of gas giants. Yet super-Earths don’t accumulate that much gas: their atmospheres are only 1-10% the mass of their core. How do these planets manage to avoid runaway accretion?

Super-Earths may often have too little gas for their large core masses, but the flip side of this puzzle is that of super-puffs. Super-puffs are a rare class of short-period Kepler planets with the opposite problem: they have too much gas relative to their core mass. Super-puffs have large radii of 4–10 Earth radii, but small masses of 2–6 Earth masses. Their atmosphere-to-core ratios are > 20%. 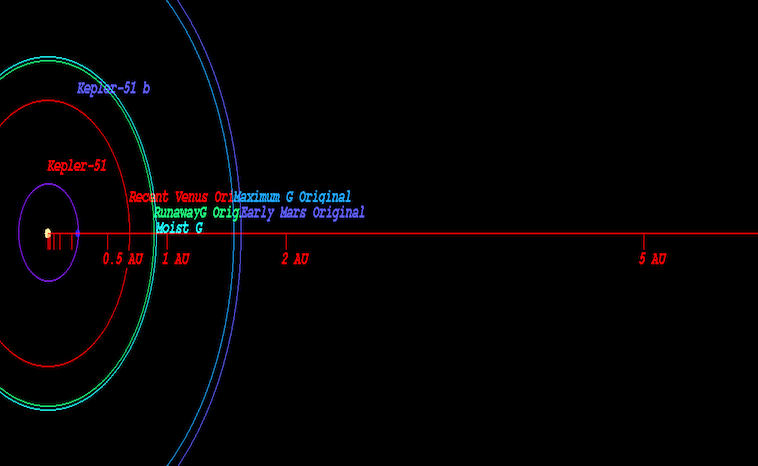 Meet Kepler 51-b and 51-d. They have about the same density as a package of cotton candy. The two planets, which orbit a young star only about 500 million years old, are newborn worlds nearly as wide as gas giants, though they weigh in at less than 10 times the mass of Earth. They are the lowest density planets discovered to date. Furthermore, some scientists say that cotton candy would make a great comparison.

What makes up the atmosphere of these planets? Jessica Roberts from the University of Colorado, Boulder believes that she may have the answer.

She found that both planets produced a signal suggesting tiny particles called aerosols dominated the atmospheres. These aerosols could be created by massive cloud banks.  They may also indicate a planet-encircling haze.

In the solar system, Saturn’s largest moon, Titan, is the only one to be dominated by a haze layer made of hydrocarbons, most likely methane and ethane. The massive moon may provide insight into the super-puffs, which could bear an extended version of the haze. Meanwhile, Ms. Roberts wanted to find a real-world application to see if she could determine what the super-puff planets consisted of. By applying some physics she could calculate their mass. Once she knew that number she set out to find a match. What did she discover? Cotton candy.

For her cotton-candy deductions, she headed to a grocery store and bought containers of cotton candy. The freshly spun material wasn’t dense enough, but she hoped the prepackaged tubs might work. She measured the volume of the container and weighed the material to calculate its density, which was a close match for the super-puffs. Roberts concludes that eventually, the planets will resemble something closer to Neptune.

Unfortunately, we will never see that happen in our lifetime. But for now, it is fun to think about planets that have the consistency of cotton candy.