What are Stellar Populations?

In the 1940s, astronomers realized that there are two families of stars in the galaxy. What are the two families? Read on to learn more about stellar populations.

Before the 1940s, astronomers believed that all stars were quite similar. In 1944 a German astronomer named Walter Baade changed that belief. He determined that stars differed in their age. He made this discovery during World War II when he kept a residence in Los Angelos, California. As a German, the American government kept a close eye on him, and he made good use of his time at the Mount Wilson Observatory. He spent hundreds of hours looking through the 100-inch telescope at Mount Wilson and made some fantastic discoveries. He discovered two types of Cepheid Variable stars and that some stars in the Milky Way galaxy are older than others. 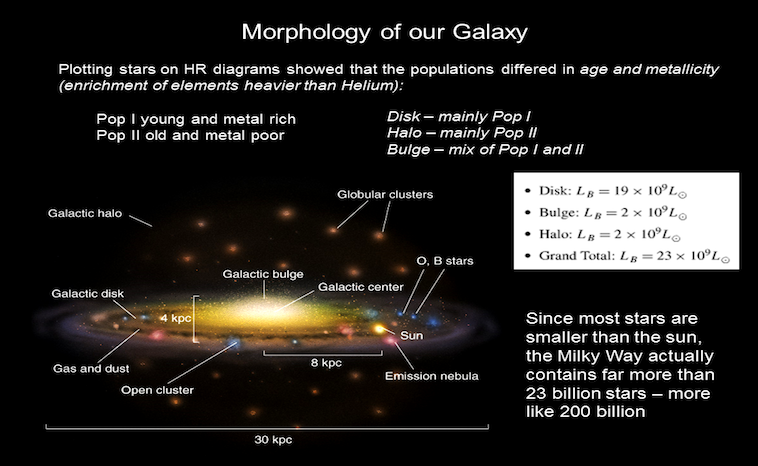 Population II stars belong to the spherical component of the galaxy, are red, often called halo population stars. These stars have randomly tipped orbits ranging from circular to highly elliptical. They are old stars that formed when the galaxy was young. The metal-poor globular clusters exist in part of the halo population and can also in the central bulge.

The Population II stars, such as those in the halo, are the survivors of the early generations of stars in our galaxy. The first stars formed from gas that was metal-poor. As a result, the only survivors of these early generations are low mass, long-lived stars. Their spectra, which indicate the composition of their atmospheres and not their core, still show the composition of the metal-poor gas from which they formed.

Astronomers know how to find the age of star clusters because they can estimate the age of the oldest stars in the galaxy. Scientists believe that the oldest open clusters are 9 to 10 billion years old. Because old clusters change so slowly, they can have a difficult time finding their true age. Furthermore, open clusters are not strongly bound by gravity, so older open clusters may have dissipated as their stars wandered away. It is reasonable to suppose that the galactic disk is somewhat older than the oldest remaining star clusters. This suggests that the is disk is at least 10 billion years old.

Thanks to the work of Walter Baade we now know that every star has age and can further study new forming stars to learn their key differences to older stars.