NASA has new plans to develop a shade that blocks the light from a star. Read on to learn more about the starshade and telescope with a coronagraph.

One of the biggest problems that astronomers and researchers have is seeing the planets that may orbit another star. The star’s brightness blocks out the ability for telescopes to see possible planets. A large shade in front of the star would help block its light. The idea for such a shade came about in the 1960s. However, the technology was not available to make a starshade.

Researchers working on ExEP’s Starshade Technology Development, known as S5, have been tasked by NASA with developing starshade technology for possible future space telescope missions. Starshades have never flown in space. However, they hold the potential to enable groundbreaking observations of planets beyond our solar system. These observations would include pictures of planets as small as Earth. To see these planets, NASA needs two machines to fly together successfully. 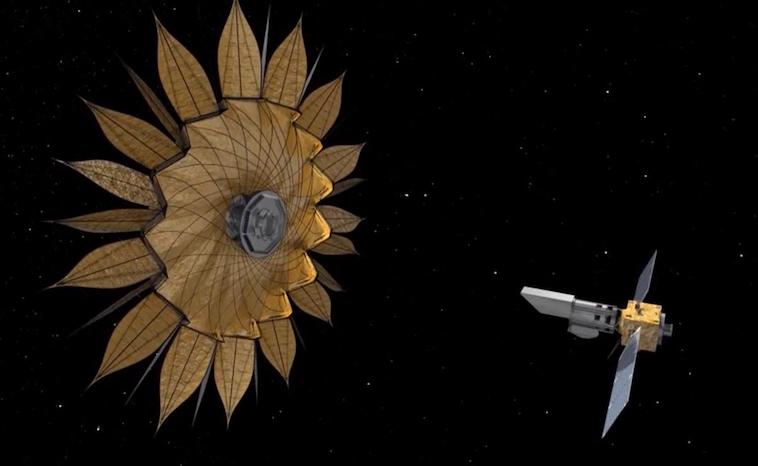 NASA needs two spacecraft to achieve this amazing idea. One would be a space telescope on the hunt for planets orbiting stars outside of our solar system. The other spacecraft would fly some 25,000 miles (40,000 kilometers) in front of it, carrying a large, flat shade. The shade would unfurl like a blooming flower — complete with “petals” — and block the light from a star, allowing the telescope to get a clearer glimpse of any orbiting planets. But it would work only if the two spacecraft were to stay, despite the great distance between them, aligned to within 3 feet (1 meter) of each other. Any more, and starlight would leak around the starshade into the telescope’s view and overwhelm faint exoplanets. (NASA, 2019)

Trying to complete a feat of this magnitude is hard to imagine. A NASA researcher explains the following for people to understand the difficulty of this mission.

“The distances we’re talking about for the starshade technology are kind of hard to imagine,” said JPL engineer Michael Bottom. “If the starshade were scaled down to the size of a drink coaster, the telescope would be the size of a pencil eraser, and they’d be separated by about 60 miles [100 kilometers]. Now imagine those two objects are free-floating in space. They’re both experiencing these little tugs and nudges from gravity and other forces, and over that distance, we’re trying to keep them both precisely aligned to within about 2 millimeters.”

For NASA to see planets around a star, it needs a telescope to work with the shade. If they built a shade 85 feet (26 meters) in diameter, they could use the WFIRST telescope. NASA’s Wide-Field Infrared Survey Telescope has a 2.4-meter-diameter primary mirror. NASA plans to launch WFIRST in the 2020s.

WFIRST will carry a different starlight-blocking technology, called a coronagraph, that sits inside the telescope and offers its unique strengths in the study of exoplanets. This technology demonstration will be the first high-contrast stellar coronagraph to go into space, enabling WFIRST to image giant exoplanets similar to Neptune and Jupiter directly.

Keeping the spacecraft aligned will be the challenge going forward. Scientists believe that they will have that problem solved possibly before the launch of WFIRST. However, a starshade project has not yet been approved for flight, but one could potentially join WFIRST in space in the late 2020s. Meeting the formation-flying requirement is just one step toward demonstrating that the project is feasible.

The possibility of finding new planets with the use of a starshade seems like a great idea. We look forward to seeing how this new technology helps to discover other planets in the solar system.