Scientists have discussed the possibility of using one of the Martian moons Phobos and Deimos as bases from which astronauts could observe the Red Planet. Furthermore, they could use the moons to launch robots to its surface. These moons could shield cosmic rays and solar radiation for nearly two-thirds of every orbit. The harsh conditions of Mars may be too much for early explorers and the moons could help protect them until more is learned.

Phobos and Deimos were discovered in 1877 by American astronomer Asaph Hall. He was studying Mars when he found the small orbiting moons. Hall discovered Deimos on Aug. 12 and Phobos on Aug. 18. He thought he had spotted the one moon earlier, but bad weather prevented him from making a final report. Eventually, he again the two moons. It was difficult as both tiny moons hid in the glare from the planet.

The moons are quite small when compared to Earth’s moon. Many speculate that they appear more like asteroids. Phobos measures 14 miles (22 km) across while Deimos measures 8 miles (13 km) across. The two moons of Mars are too small to pull themselves into a spherical shape. Scientists believe their composition to be made up of material that resembles Type I or II carbonaceous chondrites.

Where did the moons come from? Scientists speculate that a collision may have blown chunks of the red planet into space, and gravity may have pulled them together into the moons. 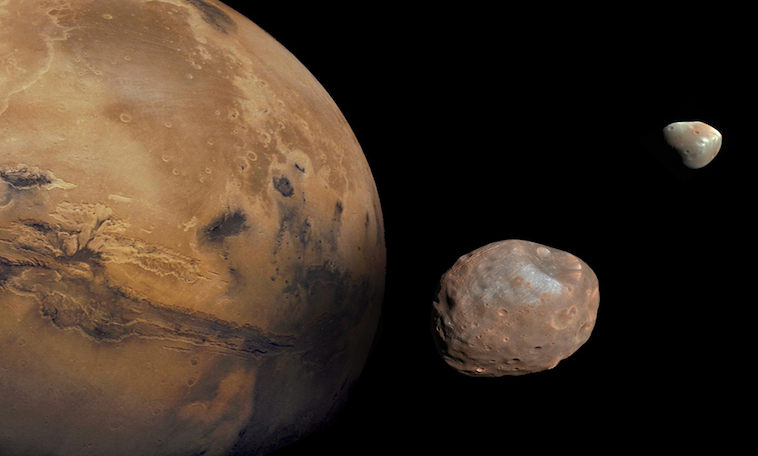 Even from Mars, the moons don’t look like moons. The more distant moon, Deimos, appears more like a star in the night sky. When it is full and shining at its brightest, it resembles Venus as seen on Earth. Phobos has the closest orbit to its primary of any moon in the solar system, but still only appears a third as wide as Earth’s full moon.

Phobos orbits only 3,700 miles (6,000 km) from the Martian ground. Its surface is marred by debris that may have come from impacts on Mars. It travels around the planet three times a day, zipping across the Martian sky approximately once every four hours. The fast-flying moon appears to travel from west to east.

Deimos orbits much farther away, tending to stay 12,470 miles (20,069 km) from the red planet’s surface. The moon takes about 30 hours, a little over a Martian day, to travel around its host.

In 2015, three engineers from NASA JPL proposed a series of missions which establish a beachhead on one of Mars’ moons first, before sending humans down to the planet.

They suggested that a campaign to send humans to Mars would be broken up into four major stages. First, missions would be sent to Phobos to set up infrastructure on the Moon. Next, astronauts would go down to the surface for a one-month stay. Then a more extended one-year expedition would be carried out. And finally, there would be the move to a permanent presence on Mars.

Setting up a presence on Phobos would require four launches of the Space Launch System Block 2, but SpaceX Starships would work nicely too. The first three rockets would carry supplies, a Phobos habitat, and a return vehicle for astronauts to come home. The fourth launch would take an Orion capsule with four astronauts to Mars, following a 200 to the 225-day trajectory to bring them to Phobos.

The astronauts would live on the Phobos station for about 500 days, performing science on Phobos. Then they’d come home, maybe even making a side visit over to Deimos on the way back, taking another 250 days to return.

Is making Phobos and Deimos staging areas for travel to Mars? Considering the potential threat to humans that Mars poses, this sounds like a reasonable thing to do before putting people on Mars.