Space Hurricane At the North Pole

Scientists have reported that a hurricane of plasma churned over the North Pole in 2014. Read on to learn more about plasma hurricanes.

What caused a 600-mile wide hurricane of plasma to appear over Earth’s North pole in August of 2014? Researchers from the University of Reading in the United Kingdom believe they have the answer. According to their latest Nature Communications report, solar winds mixed with the magnetic field over the North Pole. As a result, a space hurricane formed that lasted eight hours.

The naked eye cannot detect a hurricane made from solar winds and magnetic fields. However, four weather satellites that pass over the North Pole detected the hurricane formation. The hurricane appeared similar to what we normally observe when these storms threaten continents. For example, its shape resembled a funnel, with an “eye” at the center. Furthermore, several counterclockwise-spinning spiral arms surrounded the eye. The difference between a space hurricane and a normal hurricane was what formed the spirals. In this case, the spirals formed from plasma. Plasma is an ionized gas found throughout the solar system and Earth’s atmosphere.

“Until now, it was uncertain that space plasma hurricanes even existed, so to prove this with such a striking observation is incredible,” study co-author Mike Lockwood, a space scientist at the University of Reading in the U.K. He went on to say, “Tropical storms are associated with huge amounts of energy. These space hurricanes must be created by substantial and rapid transfer of solar wind energy and charged particles into the Earth’s upper atmosphere.”

The researchers made a model to test their theory that the weather satellites detected a space hurricane. Scientists often use models to test theories.

Model Making to Test a Theory

They knew that reconnecting magnetic field lines can transfer solar wind energy into the magnetosphere and ionosphere. Therefore, the team modeled this process. They found that a reconnecting interplanetary magnetic field can produce the features they observed in the space hurricane, even when the solar wind is low. Furthermore, they surmised that the low solar wind might allow for more efficient magnetic reconnection.

This event led to other observations. For example, when geomagnetic conditions are quiet, space can create extreme weather that can impact Earth’s life and the skies above it. Should people fear a space hurricane? Researchers say more than likely not. It would not hurt people but can impact GPS, satellites, and radio communications. 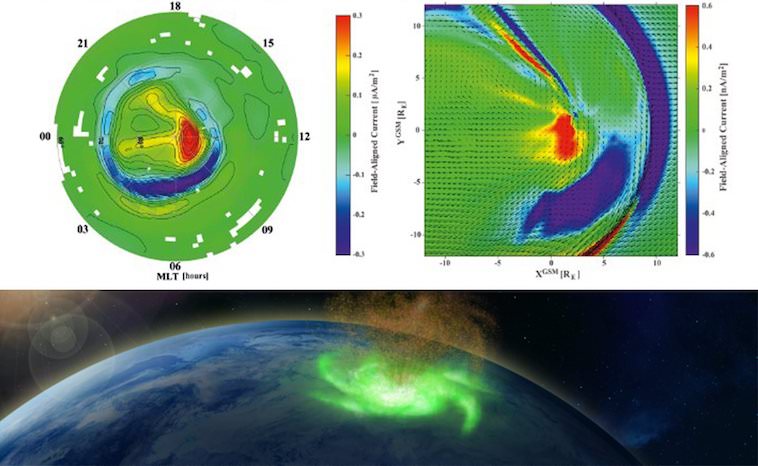 Space Hurricanes on Other Planets?

While this is the first observed space hurricane, the researchers hypothesize that these “weather” systems could be common events on any planet with a magnetic shield and plasma in its atmosphere. In space, astronomers have spotted hurricanes on Mars, and Saturn, and Jupiter. These planets have similar terrestrial hurricanes in the low atmosphere.

“Plasma and magnetic fields in the atmosphere of planets exist throughout the universe, so the findings suggest space hurricanes should be a widespread phenomenon,” Lockwood said.

Knowing that these events can occur in the atmosphere above our planet, scientists can identify and observe these storms in the future.

Half-life: Measuring the decay of atoms on asteroids