Over the last several years astronomers have applied the shift-stack technique to search for unseen objects in the night sky. Read on to learn about this technique and how it is being applied to look for planet nine.

The shift-stack technique involves taking a series of pictures and aligning them into a single frame. Astronomers use this technique to capture details that would be otherwise be missed in a single photo. However, when searching for deep space objects, the process requires taking pictures over a period of time.

Researchers want to reduce the amount of noise in their images. This allows the benefits of an improved signal-to-noise ratio. A stacked image will have a much “smoother” background and improved image quality. In order to locate a potential planet nine, they use the shift-stack technique. The process of looking for deep space objects involves specific steps.

The flux is the amount of energy reaching each square centimeter of a detector every second. The “shift-stack” technique involves observing a specific point in the sky for 27 days. Astronomers have used NASA’s Transiting Exoplanet Survey Satellite (TESS) is an all-sky survey mission. They use this to discover thousands of exoplanets around nearby bright stars.

How does TESS work? TESS detects the slightest source of light from a moving object in the sky. Once the object has been found, it must be followed to identify its trajectory; this is the “shift” part. Then, when all the images are gathered, they must be “stacked.”  They are stacked in order to identify the maximum amount of light coming from this object in question. As a result, they can extract the maximum information from it.

Utilizing TESS, astronomers pursue the search for planet nine. Currently, they find exoplanets almost every day at the edge of the Milky Way. Does a star much closer to us remain elusive? The very existence of this star has not yet been proven. However, certain gravitational anomalies suggest that it would be located far beyond the orbit of Neptune. 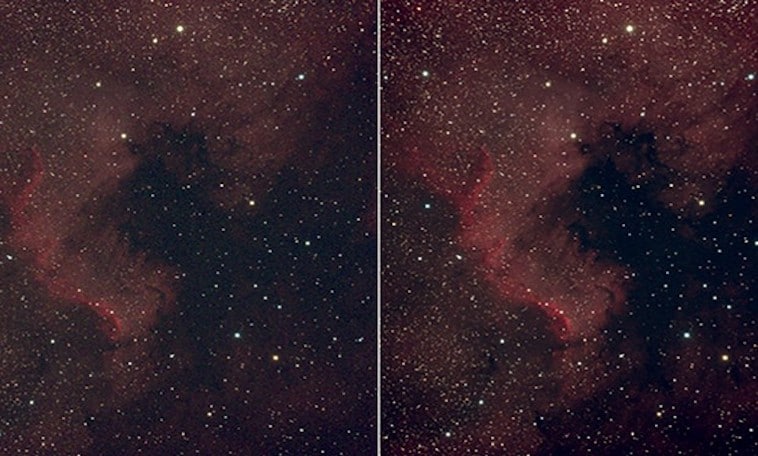 Before (Left) After (RIght) Credit: BBC Sky at Night Magazine

How do they know that the shift-stack method works? During a test phase, researchers located three previously identified transneptunian objects. However, finding the ninth planet will take much more time and observation. TESS’s observation field is divided into 26 sectors, and only two of them were scanned for the testing phase.

“There is a lot of data to process. For example, each sector has several hundred Gigabits! You have to store them and run the software at the same time. I had a few hard drives that went through the process badly!” said researcher Malena Rice.

How far away do they believe the ninth planet may orbit? According to some estimates, it may lie as much as 800 astronomical units from the Sun. The light rays reflecting off this planet would remain very faint. Furthermore, the density of the Sun’s rays weakens as they travel toward the planet.

Researchers plan to pursue the theory of planet nine. “With machine learning processes, we will be able to do faster and more robust checks,” assures Malena Rice. Utilizing the shift-stack method, we may one day find planet nine.”