Saturn’s North Pole is home to layers of hexagon-shaped clouds. What are the clouds made of and how do they keep their shape? Read on to learn more about Saturn’s strange hexagon cloud.

Imagine looking up at the sky and seeing hexagon-shaped clouds. While the clouds here on Earth do not form in a specific shape, the clouds at the North Pole of Saturn do. Saturn’s strange hexagon-shaped clouds have puzzled scientists for years. Why do they form this way? How do they keep their shape? Researchers from the Planetary Science Group at the University of Basque Country in Spain believe they may have the answer.

The Basque Country team discovered that the hexagon is composed of a multi-layered system. Furthermore, it consists of seven layers of mists or hazes that extend from the top of the clouds to more than 186 miles above them. They believe that frozen particles of butane, acetylene, or propane make up the layers.

“The Cassini images have enabled us to discover that, just like a sandwich, the hexagon has a multi-layered system of at least seven mists. They extend from the summit of its clouds to an altitude of more than 300 km above them,” said Professor Agustín Sánchez-Lavega, who led the study. “Other cold worlds, such as Saturn’s satellite Titan or the dwarf planet Pluto, also have layers of haze, but not in such numbers nor as regularly spaced out.” 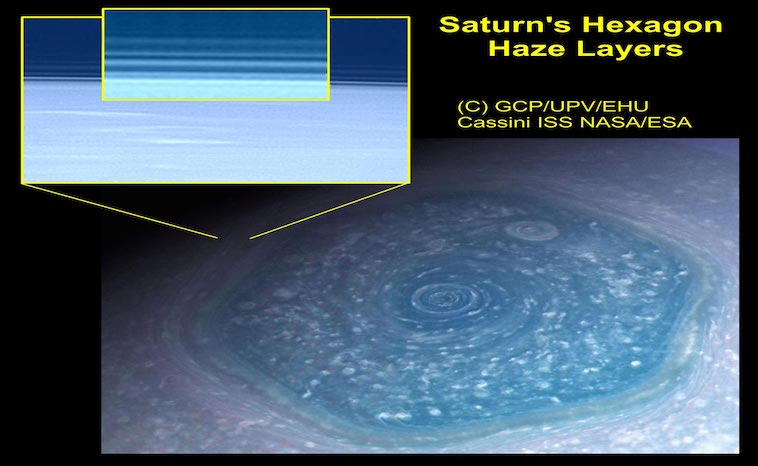 Researchers sent Cassini to Saturn in 2004. During this mission, it captured stunning images of the North pole. The north pole was dark when Cassini first arrived in July 2004. However, high-resolution views became available once Cassini changed its orbit around Saturn. The sun began to illuminate the entire interior of the hexagon in August 2009. Why? It was the start of northern spring. In late 2012, Cassini began making swings over Saturn’s poles, giving it better views of the hexagon.

At that point, they discovered the hurricanes and other storms caught inside the vortex. The eye of the hurricane in the center of the vortex may be 50 times larger than a hurricane eye here on Earth. In addition, smaller vortices spin within the hexagon. Some vortices spin counter-clockwise against the direction of the spinning hexagon.

Outside, the hexagon spins a jet stream similar to ones on Earth. One Earth, jet streams may travel 62 miles per hour. However, these jet streams flow stronger and faster.