Researchers want to know if life exists on Mars, which seems impossible due to it’s extremely cold temperatures. In order to look for life on the red planet, scientists build special space rovers and robots.  These machines must withstand harsh conditions and terrain. In order for the rovers to trek across Mars, a series of tests will tell the scientists whether the machine is ready for space. Since they cannot hop an airplane to Mars to test their rovers and robots, they must find someplace here on earth.

Although Antarctica cannot perfectly replicate the temperature in space, it does provide researchers with basic information they can build on. So where on the Earth do they travel that is void of life?

Along the Pacific coast of South America lays the desert of Atacama. Studies conducted by NASA have concluded that this desert, located in northern Chile, is in fact the driest desert in the world. The mountains surrounding the desert prevent rain from falling. The lack of water keeps plants from growing. Without the plants or water, animals and people cannot survive in this climate. Soil samples collected and analyzed suggests that extremely dry conditions have persisted in the Atacama Desert for at least 10 to 15 million years. How will they find living organisms in such an environment? 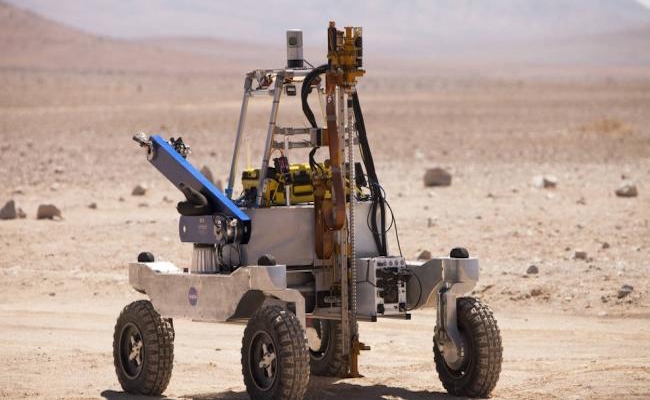 Using rovers, like the KREX-2, scientists drill into the earth.  They drill down about 2 meters and collect soil samples looking for microorganisms. Scientists believe tiny organisms dig down deep into the soil to avoid the blaring sun.  Similarly, if organisms exist on Mars, they may be underground hiding.

The KREX-2 carries a lightweight two-meter drill, along with a robotic arm used to collect samples. The drill will provide the ability to dig deep into Mars’ surface and possibly locate small microorganisms. 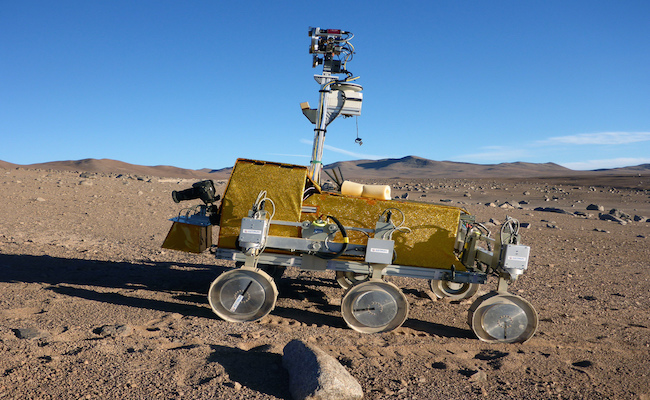 “Bridgett” developed by Airbus Defense and Space plans to travel to Mars in 2018. This Mars rover will specifically look to find evidence of past or present life. Fifty motors will power the drill, deploy the mast, control the cameras, unfold its solar panels, and most importantly drive the wheels.

How Will It Work in the Dark?

Recently, British astronaut Tim Peake performed a challenging experiment. The experiment involved driving the rover in a dark environment. Due to the fact, the battery is powered by the Sun, operating the rover in the dark becomes an issue. The inability to control the rover may lead to its demise.  Scientists wanted to know that their rover would overcome potential obstacles easily.

In normal daylight conditions, the rover contains autonomous navigation, which means it can plot a route and drive itself across the Martian surface.

Using Bridget’s eyes, Tim successfully controlled the rover to identify a series of painted targets in a darkened area. The area represented a cave on the Red Planet. If there is life in the cave, the rover will go in and collect samples.

Scientists look forward to finding out what may live in the rocks and underground on Mars. With the help of Bridgett and other space rovers in the future, we may be able to finally answer the question, “Is there or was there life on Mars?”