We are all familiar with the rings of Saturn, but did you know that Uranus has rings as well? Read on to learn more about the rings of Uranus.

Uranus never grew massive enough to capture large amounts of gas from the solar nebula as did Jupiter and Saturn. Uranus is rich in water and ice rather than hydrogen and helium. Modern models of the origin of the solar system suggest that Uranus and Neptune formed closer to the sun than their present positions. For this reason, interactions with massive Jupiter and Saturn could have gradually moved Uranus and Neptune outward. Consequently, this movement caused the tidal effects that produced Uranus’s peculiar rotation.

Uranus rotates on its side, with its equator inclined about 98° to its orbit. As a result, the winter-summer contrast is extreme with the sun passing near each of the planet’s celestial poles at the solstice. For this reason, half of the planet is in perpetual darkness and the other half in perpetual light for the 21-year-long summer and winter seasons. Infrared measurements show that Uranus is radiating about the same amount of energy that it receives from the sun. This means it has less heat flowing out of its interior than Jupiter, Saturn, or Neptune. Astronomers are not sure why this planet differs in respect to the other Jovian worlds.

The rings are not easily visible from Earth. The first hint that the planet had rings came from occultations.

“Occultations- the passage of a planet in front of a star during which the rings momentarily blocked the star’s light.”

The occultation of Uranus occurred when astronomers noticed them in 1977 aboard the Kuiper Airborne Observatory. The Kuiper Airborne Observatory was in service from 1974-1995. Capable of conducting research at 47,000 feet, the Lockheed jet had a range of 6,000 nautical miles. NASA used it to support research in infrared astronomy. Most of what astronomers know about the rings come from the observations by the Voyager 2 spacecraft. Their composition appears to be water ice mixed with methane. The methane has darkened due to exposure to solar wind particles trapped in the planet’s magnetosphere. 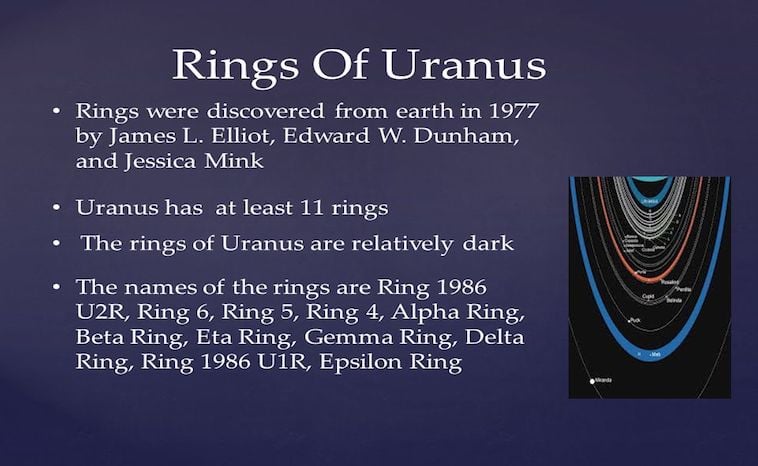 What makes the rings around the planet so narrow? Unlike the rings of Jupiter and Saturn, the rings around it remain narrow like hoops of wire. As a result of collisions, one might expect the rings to gradually spread into thin sheets. Presumably, something is confining the narrow rings. In fact, two small moons orbit just inside and outside the one ring. If a ring particle drifts away from the ring, the corresponding moon’s gravity will nudge it back into the ring. Therefore, the moon’s are referred to as shepherd satellites. More shepherd satellites, too small to have been detected so far, are thought to control the other rings.