Imagine seeing a star spin so fast that it takes the shape of a pumpkin. NASA has found that these types of stars do exist. Read on to learn more about pumpkin stars.

We tend to think of stars as perfect round spheres like our moon orbiting through space. In fact stars, like our sun, are vast balls of exploding gases emitting flares other energy into space. Furthermore, we often look into the night sky and only see the light from a star and think how quiet and peaceful space must be. Astronomers using observations from NASA’s Kepler and Swift missions have discovered a batch of rapidly spinning stars call pumpkin Stars. They produce X-rays at more than 100 times the peak levels ever seen from the sun. The stars, which spin so fast they’ve been squashed into pumpkin-like shapes, are thought to be the result of close binary systems where two sun-like stars merge.

Our sun takes about a month to rotate. While it rotates, it emits different kinds of electromagnetic radiation, and 99% of its rays are in the form of visible light, ultraviolet rays, and infrared rays. The pumpkin stars rotate every few days. Consequently, their emission becomes more extreme. A  K-type orange giant known as KSw 71, “is more than ten times larger than the sun, rotates in just 5.5 days, and produces X-ray emission 4,000 times greater than the sun does at solar maximum.” (NASA) 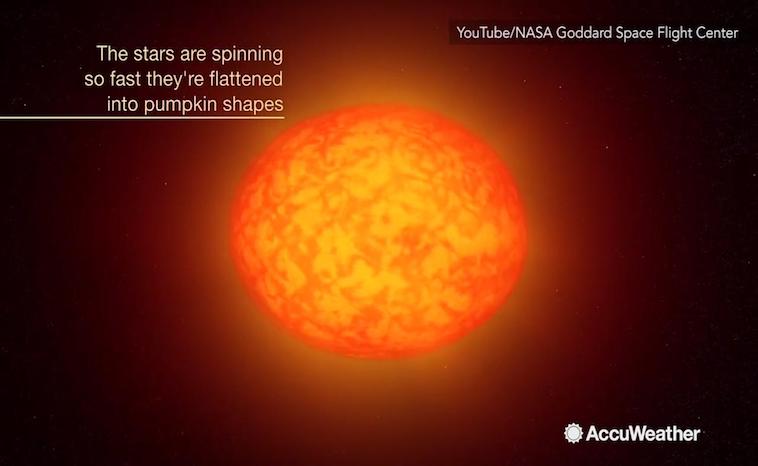 NASA’s Swift mission is multi-wavelength space observatory dedicated to the study of gamma-ray bursts. Its three instruments work together to observe GRBs and their afterglows in the gamma-ray, X-ray, ultraviolet, and optical wavebands. The devices continuously scan an area of the sky. The Kepler space observatory looks for Earth-sized planets orbiting other stars.

How Did They Find The Pumpkin Stars?

These rare stars were found as part of an X-ray survey of the original Kepler field of view. The Kepler field of views scans the area of the sky where the constellations Cygnus and Lyra lie. From May 2009 to May 2013, Kepler measured the brightness of more than 150,000 stars in this region. Ultimately,  to detect the regular dimming from planets passing in front of their host stars. The entire area was observed in infrared light by NASA’s Wide-field Infrared Survey Explorer and NASA’s Galaxy Evolution Explorer.

What they discovered were several K-Type Orange stars. Using Kepler, they measured the rotation periods for 10 of the stars. These enormous stars range in size from 2.9 to 10.5 times larger than our sun. The NASA astronomers classified them are subgiants and giants. NASA believes they will eventually become much more massive red giants.

Due to their observation of one particular area of the sky, NASA discovered many noteworthy objects.

“With KSwAGS we found 93 new X-ray sources, about evenly split between active galaxies and various types of X-ray stars,” said team member Krista Lynne Smith, a graduate student at the University of Maryland, College Park who led the analysis of Swift data. “Many of these sources have never been observed before in X-rays or ultraviolet light.” (NASA)

With continued observation, NASA hopes to catalog more of these Giants and eventually find them in other parts of the night sky. The wonders of space will continue to encourage astronomers studying the night sky for the next greatest discovery.