Which planets formed first out of the eight that astronomers consider part of our solar system? Were the outer planets first to form? Or the inner planets? Read on to learn the order of creation of the planets.

Astronomers explain that millions of years ago, the planets formed. However, which ones formed first? Was it Mercury, the planet closest to the Sun without an atmosphere? Maybe Neptune with its clouds and storm systems similar to Earth’s. Planet formation was once thought to have occurred at the same time.

New theories suggest that our Sun caused them to form at different times. The planets formed in intervals – not altogether, as was previously thought,” said Dr. Tagir Abdylmyanov, Associate Professor from Kazan State Power Engineering University in Russia. He believes that the Sun sent out shockwaves in the solar system.

The solar system is the eight major planets and their moons in orbit around the Sun. These planets exist together with smaller bodies in the form of dwarf planets, asteroids, meteors, and comets. The shockwaves caused planetary rings to form around Uranus, Neptune, and Pluto (dwarf planet). A planetary ring is a ring orbiting an astronomical object. It is made of solid material such as dust and moonlets and is a common component of satellite systems around giant planets. 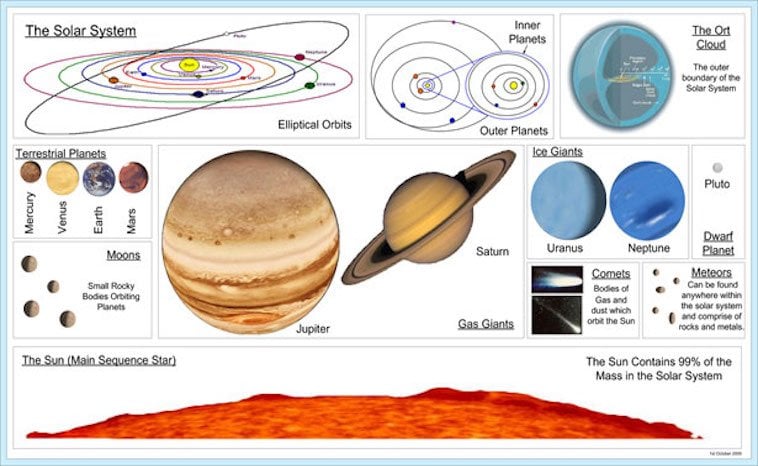 How does the Sun send out a shockwave? The Sun sends out waves of charged particles. These waves or streams, we call the “solar wind.” The solar wind can travel at different speeds. When a faster stream overtakes a slower stream, it can create a shockwave. The rings forming for Uranus, Neptune, and Pluto formed shortly after the Sun formed.

Jupiter, Saturn, and the asteroid belt would have formed next during a series of less powerful shockwaves. Dr. Abdylmyanov states that three million years after the Sun formed, Saturn formed. Further, a half million years later, Jupiter formed. Jupiter like many gas giants grew by adding more and more gas. These gases come from spinning disks of gas and dust around a young star. The inner planets are much smaller than the outer planets. As a result, they have lower gravity. This means they were not able to attract large amounts of gas to their atmospheres. However, in the outer regions of the solar system, it was cooler. Elements like water and methane did not disappear and were able to form the giant planets.

What did Jupiter have to do with limiting planet formation? Jupiter’s early birth explains why the inner solar system lacks any planets more massive than Earth. Many planetary systems far beyond the Sun have large, close-in planets. These can be rocky planets a bit bigger than Earth, known as super-Earths. They are about two to 10 times the mass of Earth. Our solar system contains no super-Earths. All of the other rocky planets (Mercury, Venus, Mars) are smaller and less massive than Earth. Furthermore, the gas giants (Jupiter and Saturn) and ice giants (Neptune and Uranus) are all larger, containing at least 14 times the mass of Earth.  Some planetary systems have gassy mini-Neptunes or hot Jupiters.

Studying the formation of planets in solar systems helps scientists learn more about our own. For now, they believe that the planets formed in this order.