Pillars of Creation in the Eagle Nebula

On April 1, 1995, NASA’s Hubble telescope captured a picture of a large cloud of interstellar gas and dust. It’s name became known as the Pillars of Creation. Read on to learn more about its changes over the past 25 years.

Twenty-five years ago, two NASA photographers took a photograph of a large area of gas and interstellar dust. That picture captured the attention of millions of people around the world. People did not know that space could appear so beautiful. It brought a new generation of amateur astronomers into the search for mysteries of space.

The Pillars of Creation lie within the constellation Serpens or Serpent, about 6,500 light-years from Earth. If you’re into stargazing, the pillars sit in between the Serpens and Sagittarius constellations in the night sky. One cannot tell how large the pillars appear just by looking at them. However, NASA has measured the pillars, and the results are mind-blowing.

The pillar on the left is a little over four light-years long or 30 trillion miles (40 trillion km!) Furthermore, the entire complex spans almost five light-years wide. Our solar system remains smaller even than one of the teeny-tiny finger-like protrusions at the tops of the pillars.

To put it all in some perspective, the entire Milky Way galaxy, home to our solar system and the Eagle Nebula, measures about 100,000 light-years across.

Believe it or not, they are the relatively small feature of the entire Eagle Nebula, which spans 70 by 55 light-years. 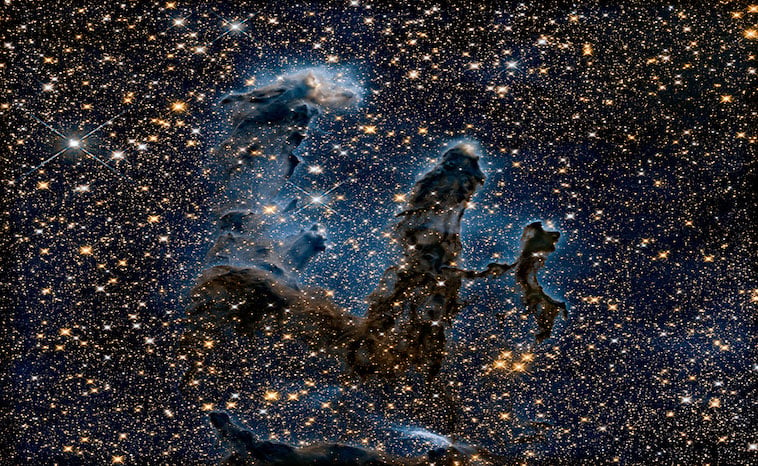 The NASA/ESA Hubble Space Telescope has revisited one of its most iconic and popular images: the Eagle Nebula’s Pillars of Creation. This image shows the pillars as seen in infrared light. The infrared pierces through obscuring dust and gas. It reveals an amazing view of the pillars. In this ethereal view, the entire frame shows bright stars and baby stars.  The ghostly outlines of the pillars seem much more delicate as silhouettes against a blue haze. Hubble also captured the pillars in visible light. Credit: ESA/HUBBLE

By comparing Hubble’s original image of the pillars to the new one, astronomers noticed changes. They found a jet-like feature shooting away from one of the newborn stars within the pillars. The jet grew 60 billion miles longer between observations. They suggest that the material in the jet was traveling at a speed of about 450,000 miles per hour.

“Our Sun probably formed in a similar turbulent star-forming region. There is evidence that the forming solar system was seasoned with radioactive shrapnel from a nearby supernova. That means that our Sun was formed as part of a cluster that included stars massive enough to produce powerful ionizing radiation, such as is seen in the Eagle Nebula. “That’s the only way the nebula from which the sun was born could have been exposed to a supernova that quickly, in the short period that represents, because supernovae only come from massive stars, and those stars only live a few tens of millions of years,” said  Paul Scowen of Arizona State University in Tempe. He and astronomer Jeff Hester, formerly of Arizona State University, led the original Hubble observations of the Eagle Nebula.

What will the pillars look like in another 25 years? Will they have changed much? What new stars will exist? So many questions that we will hopefully have answers to in another quarter-century.