NASA has contracted with the Woods Hole Oceanographic Institute (WHOI) to build a submarine for exploring the moons of Saturn and Jupiter. Read on to learn more about its mission and technology.

NASA hopes their new partnership with WHOI will one day lead them into the depths of the waters on moons such as Europa and Enceladus. In the coming weeks,  a unique underwater vehicle called Orpheus will use NASA navigation software to perform a two-week expedition into Earth’s oceans.

The Orpheus mini-submarines work will help further plans for exploring sub-surface oceans. It is in these oceans that scientists believe that microbial life exists. The deepest region in Earth’s oceans, called the hadal zone, presents similar challenges that Orpheus would experience on Europa. The pressure below the 7-mile-thick (12 kilometers) ice crust of Europa is about the same as that in the deepest trenches of the hadal zone.

The hadal zone has trenches and troughs as deep as 20,000 to 36,000 feet (6,000 to 11,000 meters).  Named after Hades, the god of the underworld, the hadal zone fits its hellish namesake. Pressed between sheer trenches, water temperatures stay within a biting 1-4°C. The zone’s pressure is equal to 1,100 tons of weight being placed on a human body at its lowest level. In addition, depths range from 6,000 to 11,000 meters and cover an area the size of Australia. As a result, submarines have trouble accessing the sites.  This is why WHOI’s latest underwater vehicle, Orpheus, is so exceptional.

“We know that there is a tremendous amount of organic material in the hadal zone and a lot of biodiversities. Organisms may exist there that have developed unique adaptations to survive in the high-pressure environment,” said deep-sea biologist Tim Shank. “But until now, we didn’t have a vehicle to go there.”

“There are quite a few similarities between Earth’s deep ocean and space exploration,” said Russel Smith, a roboticist at JPL.  He went on, the “data-constrained communication, requiring a lot of autonomy, but also challenging environmental conditions that require a lot of engineering work to deal with.” 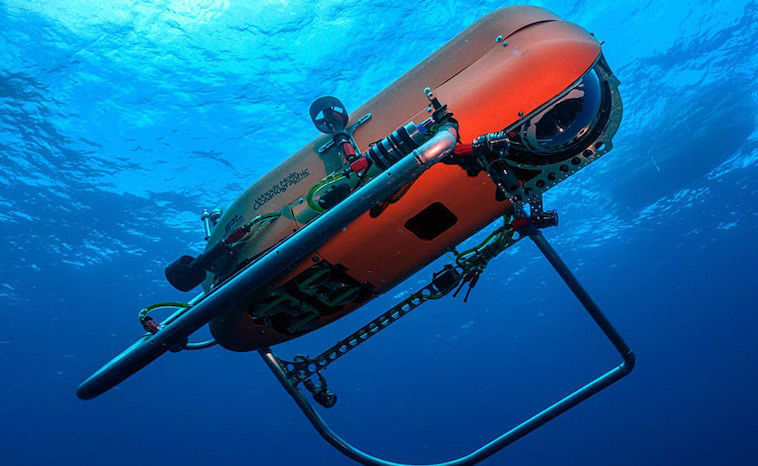 Orpheus uses the same autonomous navigation software developed by NASA for the Mars Perseverance Rover and the Ingenuity helicopter.

Orpheus will rely on Terrain Relative Navigation (TRN) technology to navigate in the dark, unexplored depths. “Terrain Relative Navigation uses cameras that look around and identify significant features in the surroundings,” said Smith. “The vehicle then uses those features to navigate. It’s like you walking into a living room and recognizing a couch and a TV. Robots do the same thing.”

The upcoming mission will see Orpheus travel from Cape Canaveral, Florida, to Norfolk, Virginia.  The autonomous submarine will also test new environmental DNA (eDNA) technology. This technology can retrieve DNA samples of organisms from the water and soil. Furthermore, it will travel above the ocean floor, taking high-resolution images combined into a 3D map of the seafloor.

The six-foot-long (2 meters) 550lbs. (250 kilograms) mini-submarine costs about $2 million to develop and build. “Things will have to get a lot smaller. Launching vehicles to space is super expensive when they are heavy and big,” said Smith. “We would also have to make sure that the electronics can withstand being bombarded by radiation in space. That is because those moons because there is no atmosphere to shield them.”

“Our grand vision is to have a whole network of these vehicles, like a dozen or so, with base stations,” Shank said. “They would communicate with each other about their position, about what they’re doing and what they’re sampling.”

With each successful mission in Earth’s oceans, NASA takes steps closer to exploring the oceans below the crust of the moons.