How do scientists get extremely large objects into space when they only have the tip of a rocket to get them there? Believe it or not, they use an ancient paper folding technique. Read on to learn more.

Origami, the art of paper folding, appeared in Japan during the 6th century. Used often in religious ceremonies, the Japanese gave these folded paper gifts to each other at weddings and special occasions. The paper creations became part of stories and the Japanese culture. Today, origami is quite popular as a way to reduce stress. Children often make basic animals like birds and frogs from the thin paper. Books have been written on the origins of origami and the Japanese culture that included it in their rituals.

NASA has recently discovered origami as a way to get large objects into space. For example, they have hardware called Starshade that would help them block the light of distant stars. Consequently, by blocking the light, their space-based telescopes could see exoplanets orbiting around those stars. Manan Arya, a technologist working on the Starshade project, tries to figure out how to get Starshade into space. Its full diameter measures at 85 feet (26 meters) wide. Using origami, Manan believes that Starshade will be able to go into space in the mid-2020s. 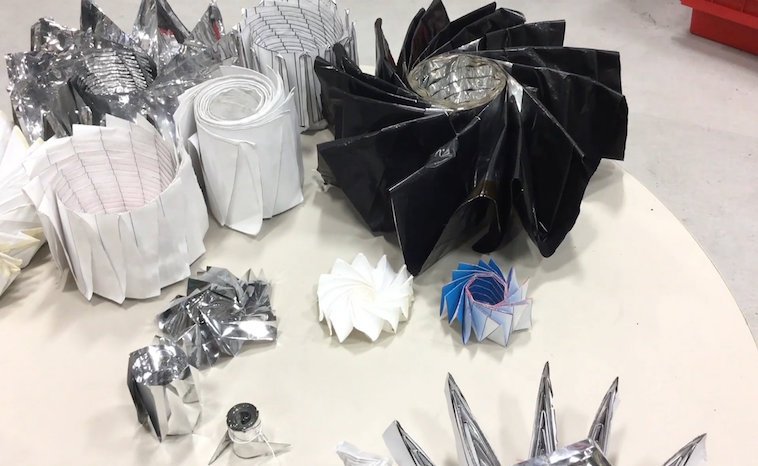 The paper-thin structure, although good for getting into space, may encounter problems with small meteorites crashing into it. For this reason, technologists have decided to add multiple layers for added protection. As a result, they have to know which types will fold well and which ones will not. Some materials may fold well, and other materials may not conform to the numerous folds required to get to a certain size. Once they get the design down, then the process of having it open and close repeatedly without error becomes a priority.

Scientists have several origami projects they want to send into space for a variety of reasons.

Folding space equipment could be incredibly useful for miniature, low-cost satellites called CubeSats. They measure about the size of a brick and require small compact instruments. Furthermore, origami also has vast implications for radiation shielding. These shields, placed on spacecraft would protect astronauts during future deep-space missions.

“There are so many origami patterns to still be explored,” said Salazar, a JPL intern. “Most designs are for shapes that fold flat. Nonflat structures, like spheres or paraboloids, largely haven’t been done.”

In conclusion, the ongoing improvement in origami construction for the space programs will help scientists send unique materials into space. One day non-flat structures may also take the place of the large metal satellites orbiting the Earth.