What is the largest volcano here on Earth? Scientists discovered Tamu Massif 1000 miles off the coast of Japan in 2013. With a span of 120,000 miles, it is the largest on Earth. Another volcano bigger than that exists on Mars. Read on to learn more about Olympus Mons.

Mars boasts some of the coolest geographical features in our solar system. From enormous mountains to huge lakes, Mars continues to amaze and baffle scientists working to learn more about our red neighbor next door. Throughout history astronomers used telescopes to study the structures of Mars. An Italian astronomer named Giovanni Virginio Schiaparelli made some keen observations with his. His observation came to be known as Olympus Mons.

Schiaparelli spent a lot of time in the second half of the 19th century staring at the red planet through his telescope.  Schiaparelli saw a light spot he named Nix Olympica( Latin-Olympic Snow). He came to the conclusion that this object must be the peak of a enormous mountain, because it was still visible during Mars’ frequent dust storms.

Observers on Earth can see Mars’ infamous dust storms with their own telescopes.  Some of the more moderate dust storms  can cover continent sized areas and last for weeks.  Once every  5 1/2 Earth years, Mars’ dust storms encircles the planet, which scientists refer to as “global dust storms”. The winds in the strongest Martian storms top out at about 60 miles per hour. Most of the hurricane force winds on Earth double that.

What did Schiaparelli discover? He discovered the biggest shield volcano in our solar system. Now known as Olympus Mon (Mount Olympus), this volcano covers about the same square miles as Arizona. 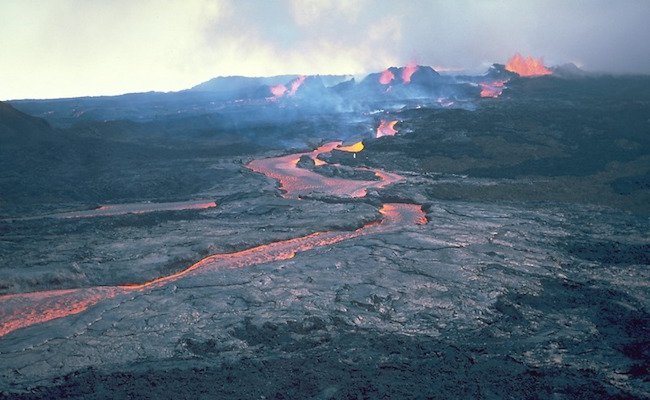 How did it get so large? Mars does not have tectonic plates like the Earth. Located in the upper mantle of Earth’s crust, a volcanic hotspot emits heat. The heat rises up in a plume from deep in the Earth.  High heat and lower pressure at the base of the mantle facilitates melting of the rock. This melt, called magma, rises through cracks to the surface and forms volcanoes. As the hotspot moves with the tectonic plate, it goes dormant. This prevents such large structures from appearing on the Earth.

When a shield volcano erupts, the discharge from the lava flows builds up layers. A dome like structure results, and in the case of Olympus Mons, the lava keeps flowing for millions of years. An example of a shield volcano on Earth is Mauna Kea on the Island of Hawaii. Now extinct, at one time this shield volcano produced enough lava to help form the island. Today Mauna Loa, another one of the Island of Hawaii’s 5 volcanos, still erupts, sending lava into the Pacific Ocean. The island continues to grow.

If you were to visit Mars and stand far away from Olympus Mons you would not physically be able to see the entire structure. Combined with its sheer size and the curvature of the planet it is impossible to view in one snapshot. The volcano also contains six Caldera’s. Caldera’s represent each time the volcano erupted. Calderas are formed by roof collapse following depletion and withdrawal of the subsurface magma chamber after an eruption.

With the youngest lava flows on Olympus Mons at only 20 to 200 million years old, scientists believe that Olympus Mons may still be active. It will be exciting to see if it does one day erupt again.