Has someone ever taken something from you? It probably made you pretty angry or even sad. In space, neighbors can steal from each other. The result? Read on to find out what happens when a star steals from another star in space.

NASA’s Chandra’s Space Observatory, whose telescope captures X-Rays in space, recently captured a explosive event. In the constellation Aquarius, exists a variable white dwarf star named R Aquarii. A variable star’s brightness can be seen from Earth but the brightness fluctuates. Although R Aquarii’s location exists 710 light years from Earth, it created a fluctuation noticed almost a thousand years ago with the naked eye.

R Aquarii, a white dwarf star, and a symbiotic star, shares a relationship with a nearby star. In this case, the nearby star is a Mira Variable. A Mira Variable means that the star pulsates and undergoes large changes in its brightness. Several key differences exist between the two stars.

By its gravitational pull, the white dwarf draws in material from the red giant and occasionally ejects some of the surplus in weird loops to form a nebula. A nebula is basically a ring of material that once was part of the star.

“a cloud of gas and dust in outer space, visible in the night sky either as an indistinct bright patch or as a dark silhouette against other luminous matter.” 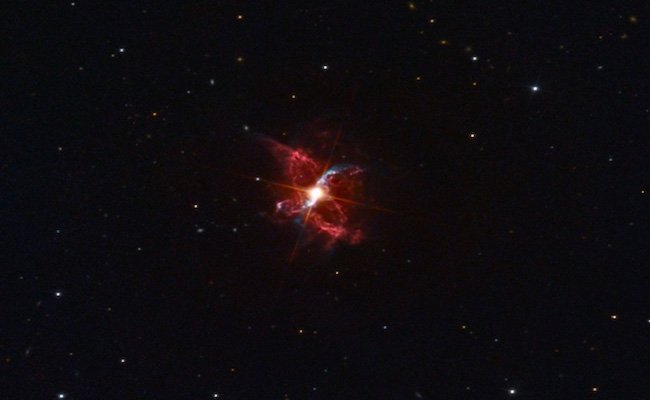 Occasionally, enough material will accumulate on the surface of the white dwarf to trigger thermonuclear fusion of hydrogen. The release of energy from this process can produce a nova. This explosion blows off outer layers of the star. At ten million miles per hour, it pushes energy and material into space.

Astronomers began using the X-ray telescope to monitor the behavior of R Aqr., after the launch of Chandra in 1999. They found the R Aqr has generated shock waves similar to that of sonic booms. The shock waves exist due to the X-rays striking surround material.

Has This Happened Before?

Scientists think a nova explosion in the year 1073 produced a ring around R Aqr. Evidence for this explosion comes from optical telescope data, from Korean records of a “guest” star at the position of R Aqr in 1073 and information from Antarctic ice cores. An inner ring was generated by an eruption in the early 1770s. The next nova explosion should not occur again until the 2470s. During such an event, the system may become several hundred times brighter, making it easily visible to the naked eye, and placing it among the several dozen brightest stars.

Our sun has not reached its Red Giant phase and does not share a symbiotic relationship with a white dwarf planet. We can rest easy knowing that a neighbor will not steal our suns energy. You can read more about the Chandra Observatory here.