If given the opportunity, would you live on the side of a cliff on Mars? An architect has published a city concept with that idea. Read on to decide whether you would live in this concept city.

Imagine that researchers and scientists have solved all the problems that come with traveling to Mars. For example, traveling for seven months in space would wreak havoc on muscles, eyes, mental stress, and the immune system. However, a trip to the new Mars City could happen if one could arrive in a healthy state. What would a new Mars City offer?

The architecture design team at ABIBOO designed Nüwa, a sustainable city on Mars that could hold up to 250,000 people. Nüwa is the mother goddess of Chinese mythology, the sister and wife of Fuxi, the emperor-god. She is credited with creating humanity and repairing the Pillar of Heaven. 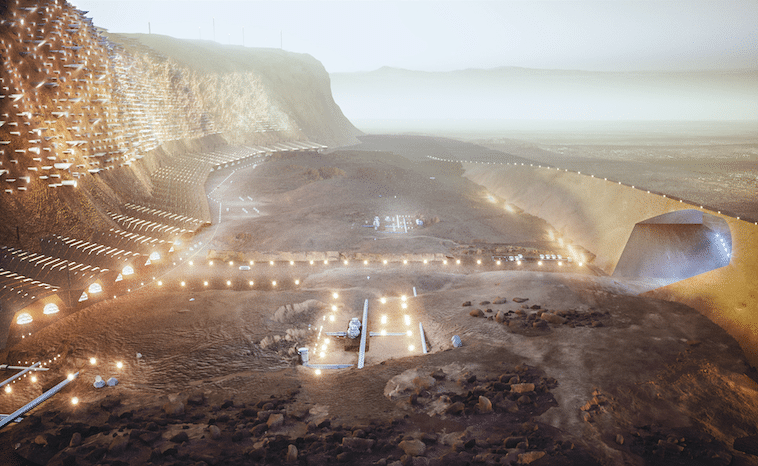 A one-way trip to Nüwa, and $300,000, would secure a residential unit of 25 to 35 square meters. In addition, a resident would have full access to facilities, life support services, and food. Furthermore, to help sustain a community, “a binding work contract to devote between 60 % and 80 % of work time to tasks assigned by the city,” said ABIBOO.

Residential units would be placed inside caves along cliffs to protect people from radiation. The Martian cliff called Tempe Mensa is part of the Mars Tharus region. They chose this location to help with growing plants for food.

At the foot of the cliff, large pavilions have been located for social interaction in the Valley. The pavilions design include a translucent skin to offer views of the landscapes of Mars. These domes feature large overflying canopies to protect the people from external radiation. The material from the cliff’s excavation is dumped on top of such roofs, protecting from radiation. At the same time, this strategy ensures recyclability even at a large-scale. In the Valley, there are also specific structures to house hospitals, schools and universities, sports and cultural activities, shopping areas, and train stations that communicate with the space shuttle.

ABIBOO says it imagines the city only requiring Earth supplies for a limited time before the city becomes sustainable. They believe that the 250,000 will take care of each other through sharing if people arrive sick from traveling or other issues.

Potential problems could arise from a collective sharing concept. The same collective concept used by the Pilgrims when they landed at Plymouth colony caused issues. During that time, their governor, William Bradford, had made a borrowing store. The governer wanted each person to contribute from their resources, like eggs and butter, and only take what they needed. It was a great idea on paper, but it did not consider factors such as human nature (laziness, self-entitlement, greed) and illness. The result? The Pilgrims almost starved to death. To fix this, Governore Bradford dissolved the collective borrowing idea. Each family was given land to work and produce what they worked by their own labor. Trade and bartering took place because people had motivation to survive. The colony prospered. The first Thanksgiving in America came from this individual self-effort.

No plans for an exact time frame have been made at this point. Some speculate that construction may begin in 2054.