Jupiter’s Io has the most volcanic activity of all the moons circling planets in our solar system. NASA wants to explore Io as part of its Discovery-class missions. Read on to learn more about what they want to study on Io.

NASA scientists want to study Jupiter’s moon Io. Io orbits close to Jupiter’s surface. As a result, the gravitational pull of the planet creates heat energy. This heat energy creates volcanic activity on the moon. A mission to Io to learn more about tidal forces may happen under NASA’s Discovery-class program. The goal of the Discovery class program is to research questions by astronomers and scientists. If NASA believes their questions need a mission to answer than NASA creates a planned mission. As a result, these missions help us learn more about planetary science and increase our understanding of our solar system.

One of the questions they want to answer concerns volcanoes on Io. Little is known about Io’s specific characteristics, such as whether a magma ocean exists in its interior. How would they learn more about the moon’s volcanoes? NASA would create the Io Volcano Explorer (IVO).  Using close-in flybys, IVO would assess how magma is generated and erupts on Io. The mission’s data collection could change our understanding of the formation and evolution of rocky, terrestrial bodies. Furthermore, it would also increase our knowledge of icy ocean worlds in our solar system. 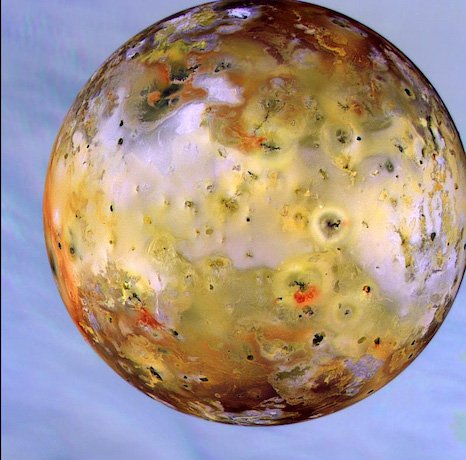 “These selected missions have the potential to transform our understanding of some of the solar system’s most active and complex worlds,” said Thomas Zurbuchen, associate administrator of NASA’s Science Mission Directorate. “Exploring any one of these celestial bodies will help unlock the secrets of how it, and others like it, came to be in the cosmos.”

Scientists generally agree that Io’s volcanoes come from tidal heating from the pull of gravity from Jupiter and its moon Europa. This tidal flexing of the moons’ surface causes the surface to rise and fall by as much as 100 meters during a single orbit. However, the volcanoes are not in the positions predicted with tidal heating. Jupiter is very massive. As a result, the side of Io nearest to Jupiter has a slightly larger gravitational pull than the opposite side. This difference in gravitational forces distorts Io’s shape. The volcanoes are shifted 30 to 60 degrees to the East. Why?

A study published in 2015, explains the eastern shift by an ocean of molten rock under the surface. The movement of this magma would generate extra heat. Liquids, especially if they are sticky (or viscous), can produce heat through friction. The team who wrote the paper believes that the subsurface ocean is a mixture of molten and solid rock. When the molten rock flows, it may swirl and rub against the surrounding rock, thus generating heat. A mission to Io would look further into this research.

As of right now, NASA has not yet decided about the Io mission. Decisions for the IVO program will be announced in 2021.