What is one the best ways for an astronaut to train for space? Read on to find out about NASA’s neutral buoyancy laboratory.

Astronauts train for spacewalks in a variety of ways. A critical part of their training takes place at NASA’s Neutral Buoyancy Laboratory. Located on the grounds of NASA’s Johnson Space Center, the indoor pool contains a replica of the International Space Station and other modules. The laboratory also allows businesses to rent time to practice using underwater Remote Operating Vehicles (ROV).

To achieve neutral buoyancy, suited astronauts or pieces of equipment are lowered into the pool using an overhead crane. They are then weighted in the water by support divers so that they experience minimal buoyant force. The buoyant force is an upward force exerted by a fluid that opposes the weight of a partially or fully immersed object. Furthermore, the weights help provide minimal rotational moments about their center of mass. 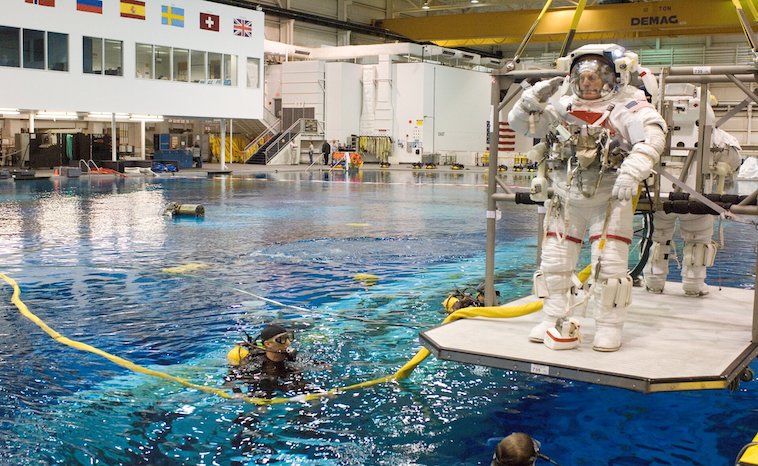 One downside of neutral buoyancy simulation is that astronauts are not weightless within their suits. This means that as divers tilt their suits, they are pressed against whatever inside surface is facing down. Astronaut Peggy Whitson suffered problems during her underwater training. She attributes the issue to the suit, which, even in the smallest size available—a medium—was too big for her. Technicians added padding, but she says she still found herself flopping around inside of it. The effort to stabilize herself led to overuse in her elbows, including torn tendons and muscles. As a result, Whitson says she can’t straighten her arms all the way because of her training in the pool. Thus, precise suit sizing is critical.

Objects in the Water

The NBL contains full-scale mock-ups of International Space Station (ISS) modules and payloads. Furthermore, it has vehicles such as the Japan Aerospace Exploration Agency (JAXA) HTV, the European Space Agency ATV, and the SpaceX Dragon. Mission Control follows the movements of the submerged astronauts, in real-time footage captured by divers with cameras. The astronauts travel glove over glove over the station, using neutrally buoyant versions of tools to conduct tasks that mimic the real work as much as possible. They also practice emergency drills, such as rescuing an incapacitated spacewalking partner.