When military jets pass overhead they sometimes cause a sonic boom. NASA wants to reduce the sound level of the boom. Read on to learn more about NASA’s new supersonic plane.

Supersonic planes were created by the United States back in the 1940s. During that same period, England had their top scientists working on the same concept. Each country wanted to create a plane that could break the sound barrier. How fast would a plane need to fly to do that? To break the sound barrier, a plane must go faster than 770 mph.

In 1944, England had completed 90% of their design of a supersonic plane. They agreed to share the information with the United States with the promise that the US would reciprocate. However, the United States did not reciprocate. In 1946, aircraft company Bell Aircraft had pilot Jack Woolams test the newly designed XS-1 in Florida. That plane did not meet the United States Army’s standards, and they sent the plane back for design changes.

The first manned supersonic flight occurred on 14 October 1947. Captain Charles “Chuck” Yeager piloted USAF aircraft #46-062, nicknamed Glamorous Glennis for his wife. A month later the United States Air Force was created. They dropped the plane from the bomb bay of a B29 cargo plane where it achieved MACH 1 at 700 mph.

In April of 2018, NASA announced plans to build another plane in the X-1 Series. This plane would achieve two goals. The Low-boom Flight Demonstration (LBFD) mission has two goals.

With the data, they could design commercial and cargo planes to travel quickly across the United States without impacting the daily lives of citizens. 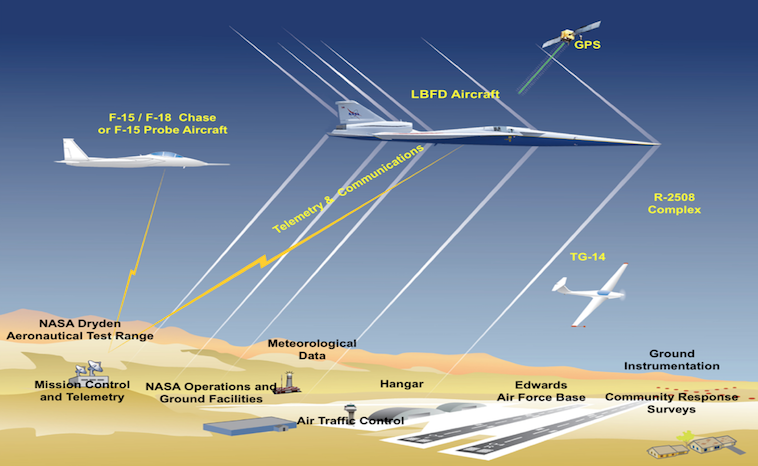 NASA plans on having the plane constructed by 2021. Furthermore, they expect to have a single pilot fly the 94-foot-long, 29.5-foot-wide aircraft.

The plane’s only power will come from a single jet engine. How fast do they think the plane will fly? Right now they believe the plane will reach Mach 1.42, or 940 mph, flying at 55,000 feet. How will they reduce the sound of the boom? It’s all in the design.

“With the X-59 you’re still going to have multiple shockwaves because of the wings on the aircraft that create lift and the volume of the plane. But the airplane’s shape is carefully tailored such that those shockwaves do not combine,” said Ed Haering, a NASA aerospace engineer at Armstrong. Instead of hearing two loud booms, people will hear only two soft thumps.

We look forward to seeing how this new technology will play out in 2021. The potential for consumer travel and commercial delivery may have huge impacts on commerce. This will be an exciting time to see how NASA changes the aerospace industry.