In a follow up to our previous story regarding the landing of the Mars Rover Insight, we will look at the rock garden NASA has built. Read on to learn more.

We reported the successful landing of NASA’s Insight rover this past November. Before Insight places its special technical equipment on the Martian surface, NASA needs to know what surrounds the rover. As a result, NASA has spent the last several weeks building a replica of the surface based on pictures sent back by Insight. What have they learned?

To prevent a costly accident, NASA has recreated the Martian surface inside the Jet Propulsion Lab in Pasadena, California. They have a working replica of Insight named ForeSight, which allows them to test all operations. The team raked, shoveled and patted down a bed of crushed garnet intended to simulate Martian sand. They call the shaping of this gravel-like material “Mars forming.” (NASA, 2018) The four-inch (10 cm) layer of garnet will help them match the height and slope of the surface. Incidentally, it took them about four hours to capture each detail of every pebble and rock near the rover. Furthermore, they have to look out for any rock that may cut the wires that connect the rover to its instruments.

Scientists were excited to see that the landing team placed InSight in a flat location. “It’s great for the science we want to do,” said JPL’s Marleen Sundgaard, who is guiding the test-bed work. “It’s the flat parking lot the landing team promised us. You calculate the probability of rocks in the area and hope the odds are in your favor.” (NASA, 2018) Furthermore. The Martian surface has craters that InSight may have landed in which would have caused severe issues. 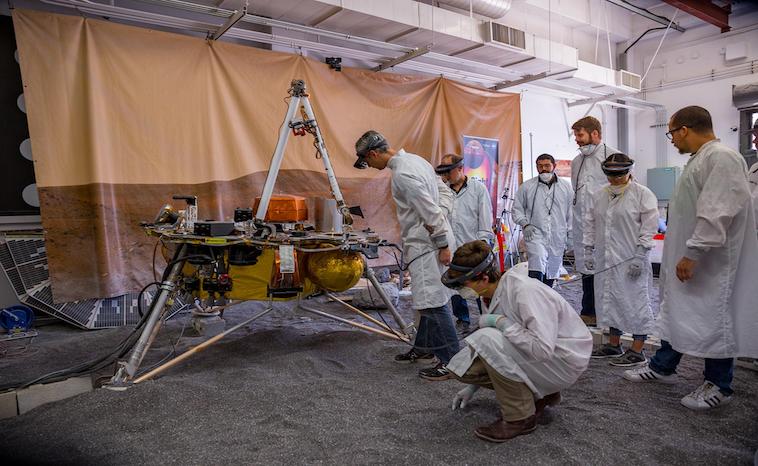 A set of special headsets from Microsoft allows them to view the Martian surface as if they were standing on it. The HoloLens headsets help them see the surface as red with blue contour lines on the terrain. These headsets project terrain models which then helps the scientists to determine whether their sandbox needs adjustment. It may require some sand added or taken away.  Incidentally, the HoloLens has also been used by scientists working with the NASA Curiosity rover.

Wood blocks marked the perimeter of the areas for the seismometer and the heat probe. The team figured out that the seismometer will go 5.4 feet (1.6 meters) in front of InSight. Meanwhile, the heat flow probe will go to the left of the seismometer, about 4 feet (1.2 meters) away.

“Seismometer deployment is as important as landing InSight on Mars,” said InSight Principal Investigator Bruce Banerdt, also based at JPL. “The seismometer is the highest-priority instrument on InSight: We need it to complete about three-quarters of our science objectives.”

They will use the seismometer to study ground motion. Scientists refer to this as marsquakes, and each one illuminates the structure of the planet’s interior. They can then learn how the seismic waves pass through the layers of the planet.

“Having the seismometer on the ground is like holding a phone up to your ear,” said Philippe Lognonné, principal investigator of SEIS from Institut de Physique du Globe de Paris (IPGP) and Paris Diderot University. “We’re thrilled that we’re now in the best position to listen to all the seismic waves from below Mars’ surface and from its deep interior.” (NASA, 2018)

By late January, the NASA team hopes to deploy the heat probe onto the surface. We look forward to tracking new developments with NASA’a Insight Rover in the coming months and years.