Astronaut Peggy Whitson retired from NASA this month. Read on to learn more about this amazing female astronaut.

Astronaut Peggy Whitson retired from NASA this month, June 2018. Why did her fellow astronauts refer to her as a “Space Ninja”? Undoubtedly this reputation comes from her record-setting spacewalks and other impressive highlights from a 22-year career at NASA. Her education includes a doctorate in Biochemistry which led her to NASA in 1989. Dr. Whitson worked on many projects for NASA in the biomedical field. In 1996, NASA selected her for their astronaut training program. It took her ten years of applying before being accepted. She successfully completed the program and became an integral part of the astronaut program. 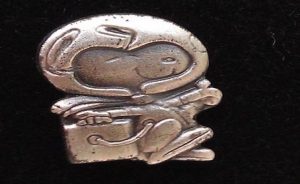 After the completion of the Mercury and Gemini projects, NASA wanted a way to promote greater awareness among its employees and contractors of the impact they had on flight safety, the flight crews and their missions. The idea for the Silver Snoopy award came from Al Chop, the director of public affairs for the Lyndon B. Johnson Space Center.  NASA wanted to use a symbol for spaceflight that would be well known and accepted by the public. Charles M. Schulz, the creator of Peanuts, was an avid supporter of the U.S. space program, welcomed the idea of using Snoopy for the award. He created the image free of charge. Peggy Whitson received this award in 1995.

“Of all the SFA Awards, the Silver Snoopy best symbolizes the intent and spirit of Space Flight Awareness. An astronaut always presents the Silver Snoopy because it is the astronauts’ award for outstanding performance, contributing to flight safety and mission success. Fewer than 1 percent of the aerospace program workforce receive it annually, making it a special honor to receive this award.”

Dr. Whitson spent more time off the planet than any other American: 665 days over three space station missions. She’s also the world’s most experienced female spacewalker, with ten under her spacesuit belt.

Whitson was the first woman to command the International Space Station, holding the position twice, and the oldest woman ever to fly in space. She was also the only woman to have served as chief of NASA’s male-dominated astronaut corps. Her retirement does not come as a surprise, as Dr. Whitson has reached her radiation limit.

Dr. Whitson was the oldest female astronaut in space (at age 57), the oldest female spacewalker, and also holds the record for the most spacewalks by a woman (10 total, the last of which was completed in May 2017). She was the first female chief of the Astronaut Office (which she stepped down from in 2012 to be eligible to fly more missions).

Her View Of Earth

When asked her favorite places to view from above, Whitson answers, “Oh my gosh, there are so many,” before mentioning the “countless numbers of the color blue” in the Caribbean, Australia’s dark reds in which you can see streaks of fires, and the Great Barrier Reef. “New Zealand looks gorgeously green,” she adds. “Patagonia, when it’s not a cloudy day you can see the glaciers,” and, “I love flying over Northern Africa, over the Sahara, because the peach-colored sands, when they were bright enough, would reflect a peach-colored light into the station.”

We appreciate the efforts of Dr. Whitson, her career and achievements are an inspiration to all mankind.