Does sound exist in space? What tools do scientists need to listen to space? Read on to learn more about mysterious space sounds.

Sounds of Saturn and Neptune

April 2017- NASA sends Cassini spacecraft to Saturn. As with most spacecraft, NASA has equipped Cassini with instruments to capture different kinds of waves, and The sound of Saturn was recorded in April of 2017. NASA’s spacecraft, Cassini, went between Saturn and its innermost ring. All probes have many instruments to capture different kinds of waves and electromagnetic radiation by electrons. Waves emitted in space do not give off a sound. However, the instruments can convert radio waves into sounds we can hear. As Cassini traveled at 70,000 mph, it captured popping and clicking sounds. NASA determined these sounds came from dust size particles. Click here to listen.

1977- NASA launches Voyager 1 and 2 to explore outer planets. People describe the sound from Neptune as blowing wind. Some parts of the sound recording include a whistling or a sound with vibrations. Click here to listen. 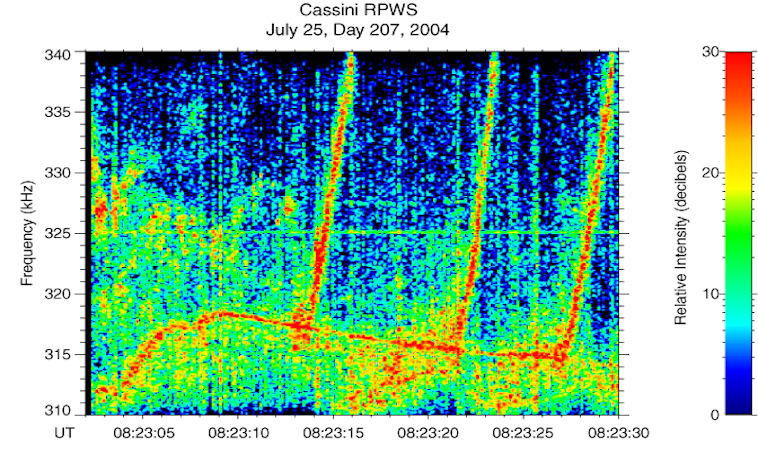 2005- The European Space Agency atmospheric entry probe, Huygens, landed on Saturn’s moon Titan. It recorded sounds that have nearly the same blips and vibrations from 1980s video games. Huygens captured radio waves as it moved through Titan’s haze and as it approached the surface. Click here to listen.

Mysterious Sounds of A Comet

Valentines Day 2011- The Stardust Spaceship flew by  Tempel 1, which is a periodic Jupiter comet. Equipped with a Dust Flux Monitor, the spaceship measured dust impacts by collecting electrical impulses and sound waves. What scientists discovered was truly amazing. Icy particles of dust and small rocks bombarded the spacecraft revealing some of the most exciting sounds ever recorded from space. An instrument attached to the spaceship. It sounds like tiny balls of hail rapidly hitting glass. This was proof to scientists that tiny ice balls continuously leave a comet and break up in space. Click here to listen.

1986- Voyager 2 makes a pass of Miranda. Miranda is known as the smallest moon orbiting Uranus. Voyager 2 was carrying different kinds of detectors to capture cosmic rays, radio waves, plasma, etc. These sounds are SolarWinds interacting with electromagnetic fields. This mysterious sound has an echo feel as if standing in a canyon with the wind blowing through it. Click here to listen.

The mysterious sound of the sun travels from a high frequency to a low frequency. Many people say that it seems to have a beat. “Waves are traveling and bouncing around inside the Sun, and if your eyes were sensitive enough they could actually see this,” said Alex Young, associate director for science in the Heliophysics Science Division at NASA’s Goddard Space Flight Center in Greenbelt, Maryland. Click here to listen.

Scientists have also detected sounds from Earth. The sound is hard to describe as it changes frequency. Click here to listen.

Scientists continue to study radio and electromagnetic waves as part of understanding the mysteries of space.