Did medieval astronomers record evidence of a planet that we now refer to as planet 9? What makes planet 9 so elusive? Read on to learn more about Planet 9.

“Kuiper Belt- region of the solar system beyond the orbit of Neptune, believed to contain many comets, asteroids, and other small bodies made largely of ice.” 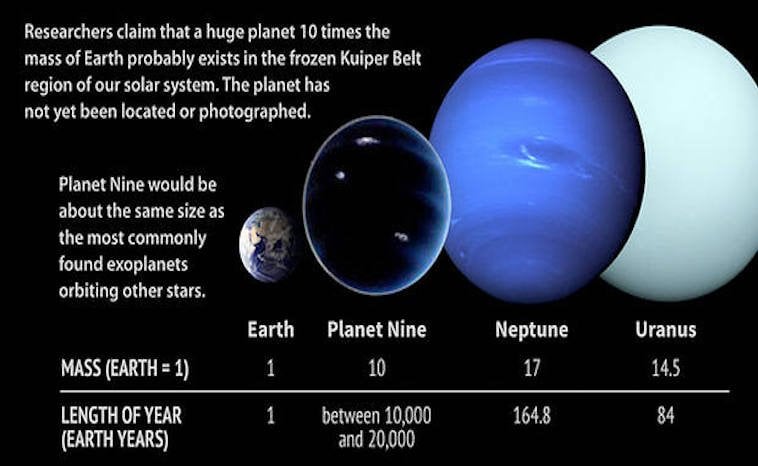 Had this planet already been discovered by ancient astronomers?

On display at the Musée de la Tapisserie de Bayeux in Normandy France is the Bayeaux Tapestry. This 70 meters (230 ft) long tapestry depicts several scenes capturing the history of the Norman conquest of England and Battle of Hastings. What does this have to do with Planet Nine? The 9-panel tapestry also depicts Halley’s Comet passing overhead with men pointing to it. Researchers know that medieval people were fascinated by the heavens and believed that they might have recorded seeing the planet.

Pedro Lacerda and Marilina Cesario working at Queen’s University Belfast in Northern Ireland hope to use old scrolls and tapestries to solve the astronomical mystery of Planet Nine.

“We can take the orbits of comets currently known and use a computer to calculate the times when those comets would be visible in the skies during the Middle Ages,” Lacerda told Live Science. “The precise times depend on whether our computer simulations include Planet Nine. So, in simple terms, we can use the medieval comet sightings to check which computer simulations work best: the ones that include Planet Nine or the ones that do not.”

Scientists suspect the existence of Planet Nine because it would explain some of the gravitational forces at play in the Kuiper Belt. Astronomers from Cal-Tech noticed that six of the 13 most distant known Kuiper Belt objects clump together in the same way. The objects travel at different rates but have similar elliptical orbits. Consequently, they wanted to know what caused these objects to behave differently and yet the same. By mapping the gravity and orbit of the known objects, they knew that not enough mass existed in that area of the Kuiper Belt to affect them. For this reason, the astronomers used computer simulation to try and figure out what could have enough mass to affect these objects. They concluded that a massive planet must exist in that region.

In the 1800’s astronomers used similar methods to determine why Uranus did not follow the mathematical orbit that it should. They hypothesized that another planet pulled Uranus into its unique orbital path. As a result, they used Newtonian laws regarding where another planet might exist and discovered Neptune.

No one has been able to detect the planet yet. Because it is far away, they do not know where to look for it. However, astronomers are scanning the skies for it with tools such as the Subaru Telescope on Hawaii’s Mauna Kea volcano. One day in the very near future we may have good news that they have found the planet. I wonder what they will name it?