NASA has a new electric airplane that it hopes one day improves air travel. Read on to learn more about this new technology.

NASA has a new airplane which is unlike other planes. What makes this one different? This one does not have combustion engines. NASA introduced the Maxwell x57 concept several years back. Engineers wanted a plane that not only would make air travel more efficient but clean. In addition, they wanted to reduce noise pollution around populated areas.

The electric plane was built in Italy and shipped to the United States in July 2018. Upon arrival, the Maxwell X57 underwent a thorough inspection as well as weight and balance testing.

“We’re all excited. We get to see in person what we’ve been modeling for so long,” said Sean Clarke, principal investigator for the X-57 project out of NASA Armstrong. “We’ve been looking forward to this for years now, so there’s been a lot of anticipation. To have it out here in front of us is a relief.”

How will the plane fly without combustion engines?

The planned final version will feature twelve small electric propellers at the X-plane’s wings leading edges. Furthermore, two larger electric cruise motors will outfit the wingtips.  These motors will generate lift during takeoff and landing only. However, the two outboard motors will be used during the cruise phase of the flight.

When the plane levels out for cruise mode, the high-lift engines will then deactivate. Then, the five propeller blades for each motor will then stop rotating and will fold into the nacelles. This action will prevent unwanted drag during the cruise. The wing will be integrated onto the fuselage once the electric power validation flights are complete. 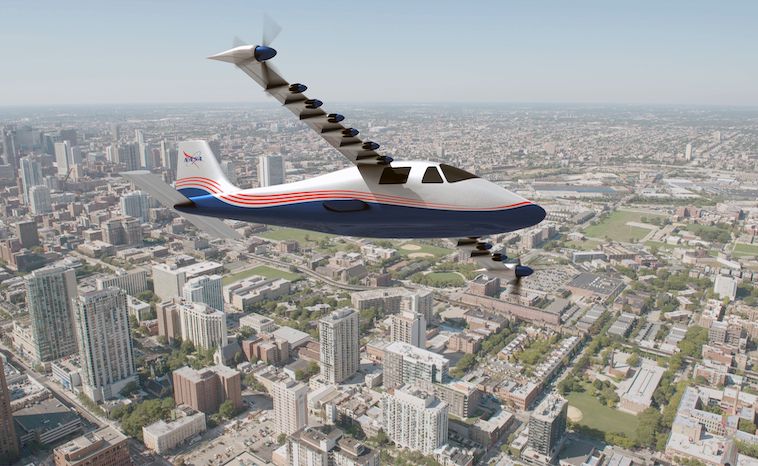 In September 2019, NASA began load tests on the aircraft in preparation for the wings. During that phase, different loads were added to see how computer calibrations would react. Engineers added and subtracted loads to the wings. They kept the loads within 120% of the wing’s design loan limit.

In addition, the wings control surfaces were activated. The engineers tested to make sure that everything rotated correctly at the right moment. Engineers tested this to determine if they would stop working at the point of something interfering with the plane. Testing revealed that the control surfaces rotated freely through their rotational range.

In addition, tests confirmed that the wing structure performed as expected as it carried approximately the 3,000-pound aircraft through the flight.

Now that the wings and engines have passed their tests, NASA can start taxi testing. All the components must work together as one unit. NASA will not put people on the plane until it knows that the aircraft remains safe to fly.

While engineers work to ensure safety, pilots work on flying simulators for the plane. Electric engines differ from combustion engines, and therefore, the pilots need to learn the differences. Pilots and engineers developed and began flying an X-57 simulator at NASA’s Armstrong Flight Research Center in California. The simulator has specifications of the electric propulsion system. Once the pilots pass their testing they can fly the Maxwell X57.

We will continue to update the progress of the Maxwell X57 as it prepares to take flight.