Researchers have long studied the origins of Lonar Lake. For decades they believed it was the ancient remains of a volcano. However, new research has led them to believe it formed from something else entirely. Read on to learn more about this unique lake.

Lonar Lake was discovered in 1823 by a British officer named C.J.E. Alexander. It sits inside the Deccan Plateau—a massive plain of volcanic basalt rock leftover from eruptions some 65 million years ago. It is the third-largest natural salt-water lake in the world and the only crater in basalt. The location in a basalt field suggested to some geologists that it was a volcanic crater.

Meteor or Something Else?

Lonar Crater is approximately 150 meters (500 feet) deep, with an average diameter of almost 1,830 meters (6,000 feet). The crater rim rises roughly 20 meters (65 feet) above the surrounding land surface. The oval-shaped crater, which has a circumference of about five miles at the top, is saline and alkaline. Perennial streams and springs feed into the lake. It’s home to a variety of algae and plankton species that thrive in its unusual ecosystem and give the water its vibrant color.

Due to the amount of basalt, no one questioned the lake’s origins past it coming from an ancient volcano. Over the years, scientists studied the lake. Through their research, they found that it was not the remains of an ancient volcano. Instead, they found that it was an impact crater. They based their findings of an impact crater on several lines of evidence.  The most compelling evidence was the presence of maskelynite. In addition, its physical features show that a meteorite impact came from the east, at an angle of 35 to 40 degrees.

Maskelynite is a type of naturally occurring glass that is only formed by extremely high-velocity impacts. A Science article published in 1973 pointed out this material’s presence. It suggested that the crater’s volcanic basalt situation made a good comparison for impact craters on the Moon’s surface. 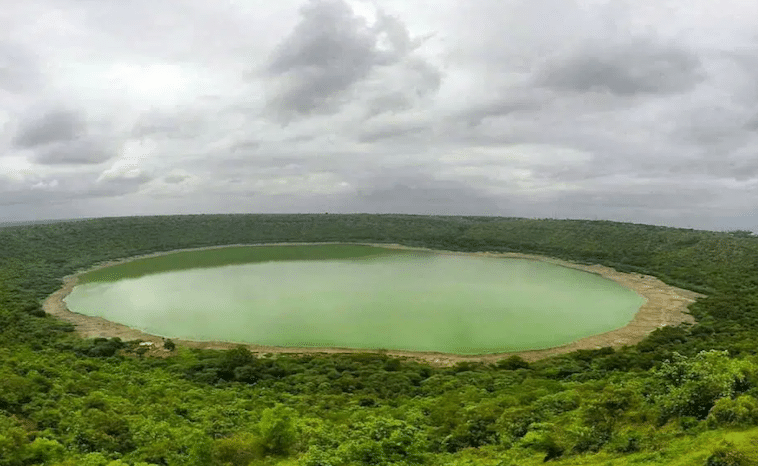 New research in 2019 suggests that they can further confirm the origins of the crater. Scientists also found chondrite; a primitive meteorite made up of tiny spheres called chondrules.  However, a debate began as to the type of chondrite that caused the impact.

Researchers suggest that the chondrite that formed Lonar Lake was part of the CM chondrite group. In the chondrite classification scheme, the C means carbon-bearing. These chondrites bring organic material to Earth when they impact it. Furthermore, researchers believe that chondrites form in the outer solar system and represent some of the most primitive material scientists have studied.

There are many temples on the edge of the crater. Most were built around the 12th century in the Hemadpanti style of the Yadava period. Lonar Lake is an important site in Hindu mythology. According to these stories, Lonar Lake became the spot where an incarnation of Vishnu overpowered the demon-giant Lonasur. This demon used to harass and trouble the local people. As a result, Lord Vishnu descended to earth to vanquish him. Vishnu overpowered Lonasur by pushing him back into the underworld with a tremendous force. The lake is considered the giant’s blood, a nearby hill is the discarded lid, and the crater is the remains of the cave.

In addition to temples, animals and vegetation surround the lake making it a tourist attraction. Researchers continue to study the water and the composition of the lake.