Only three galaxies can be seen by the unaided eye in the night sky. The Large Magellanic Cloud is one of those galaxies. Read on to learn more about this amazing galaxy.

The Large Magellanic Cloud is not a cloud at all, but instead one of the two spiral galaxies that follow the Milky Way galaxy. The Small Magellanic Cloud also orbits nearby. The galaxies were unknown to astronomers in the northern hemisphere until 1519. It was in that year that Ferdinand Magellan made his historic voyage around the world and documented the galaxies. Sadly, Magellan died on his voyage. However, his crew brought the discovery back to Europe and shared it with astronomers.

The Large Magellanic Cloud is located near the constellation of Dorado and Mensa in the Southern Hemisphere. Its position is relatively close to Earth at 163,000 light-years. It and a small cloud orbit each other and the Milky Way Galaxy. To travel to the galaxy, one would need to travel at the speed of light. The speed of light is just over 670 million miles per hour. At that rate, it would take 163,000 light-years to reach the galaxy. People can see the galaxy without needing a telescope. Spanning about 15,000 light-years or so, it is the most massive of the Milky Way’s satellite galaxies. These galaxies are gas-rich, meaning they have a higher concentration of hydrogen and helium compared to the Milky Way. 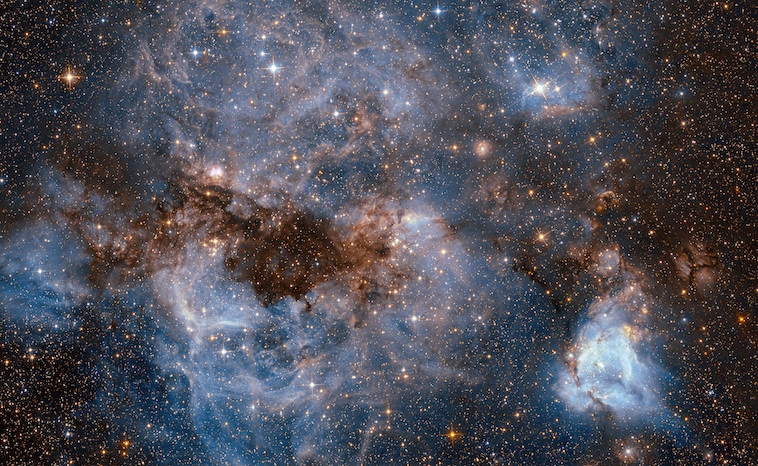 The LMC’s most striking feature is the dramatic Tarantula Nebula. The nebula makes the most stars of any galaxies, including the Milky Way and Andromada. Astronomers say that thousands of stars form within cold dark molecular clouds. Once they start shining, their gas clouds disappear due to stellar winds. These winds spin the gases into the nebula’s spider-like shape. LMC holds thousands of hot young, luminous stars.

In 1987, the closest stellar explosion in more than 400 years occurred in the outskirts of the Tarantula Nebula. When Supernova 1987A was first discovered on Feb. 23, 1987, it was one of the brightest observed and closest to Earth. This discovery led astronomers to study the phases before, during, and after the death of a star. Astronomers found that the gas and star material was ejected 20,000 years before the supernova explosion occurred. More than twenty years later, the afterglow of the explosion remains detectable.

History of the Cloud

The Magellanic Clouds have been known since ancient times by indigenous people from South America and Africa. The clouds have been referred to as the Maha Mera Paruwathaya, meaning “the great mountain.” Observers note they look like the peaks of a distant mountain range. As mentioned above, Magellan discovered the clouds during his historic voyage around the world. However, naming the clouds after Magellan did not become widespread until much later.

William Herschel, in 1847 from Cape Observatory South Africa, spent four years writing a 400-page report. In this report, he detailed over a thousand of the many stars, nebulae, and clusters that constitute the cloud. He wrote, “The two Magellanic clouds, Nubecula major and Nebecular minor, are very remarkable objects.” Scouring the heavens with his sister, Caroline, Sir William Herschel also discovered the planet Uranus and several moons around other gas giants. In the course of his studies of the night sky, he also compiled a catalog of 2,500 celestial objects that are still in use today.

Astronomers speculate that the LMC’s orbit may eventually intersect and merge with the Milky Way Galaxy.