Our night time viewing has been spectacular so far this year. Read on to find out what the second half of the year looks like.

The second half of 2018 has several events keeping us looking at the night sky.

July 27 – Total Lunar Eclipse. A total lunar eclipse occurs when the Moon passes completely through the Earth’s dark shadow or umbra. During this type of eclipse, the Moon will gradually get darker and then take on a rusty or blood red color. The eclipse will be visible throughout most of Europe, Africa, western and central Asia, the Indian Ocean, and Western Australia. 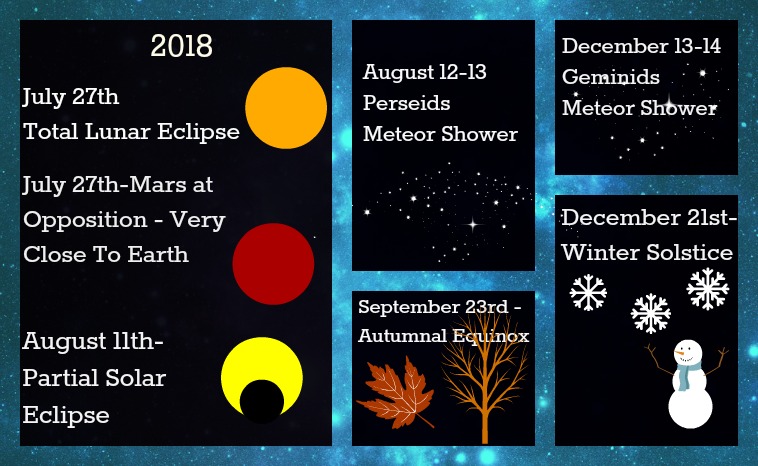 July 27 – Mars at Opposition. The red planet will be at its closest approach to Earth. It will appear brighter than any other time of the year because the sun will illuminate it. The planet will be visible all night long. This is the best time to view and photograph Mars. A medium-sized telescope will allow you to see some of the dark details on the planet’s orange surface.

August 11 – Partial Solar Eclipse. As with the last partial solar eclipse, this one will look like someone took a bite out of a cookie. Never look at a solar eclipse whether it appears full or partial.  A partial solar eclipse can only be safely observed with a special solar filter or by looking at the Sun’s reflection. The partial eclipse will be visible in parts of northeast Canada, Greenland, extreme northern Europe, and northern and eastern Asia. Northern Russia will see 68% coverage.

August 12, 13 – Perseids Meteor Shower. Produced by the comet Swift-Tuttle, the Perseids produce up to 60 meteors an hour.  The Perseids are famous for producing a large number of bright meteors. The shower runs annually from July 17 to August 24. It peaks this year on the night of August 12 and the morning of August 13. These showers will appear out of the constellation Perseus. Find a dark location to watch this magnificent meteor shower.

December 13, 14 – Geminids Meteor Shower. Known as the king of the meteor showers the Geminids produce up to 120 multicolored meteors per hour at their peak. The showers come from an asteroid named 3200 Phaethon. The shower runs annually from December 7-17. It peaks this year on the night of the 13th and morning of the 14th. Once the quarter moon sets, the showers will appear at their best from a dark location after midnight. Most of the showers will come from the Gemini Constellation.

December 21 – December Solstice. The December solstice occurs at 22:23 UTC. The South Pole of the earth will tilt toward the Sun, which will have reached its southernmost position in the sky and will be directly over the Tropic of Capricorn at 23.44 degrees south latitude. This will mark the first day of winter (winter solstice) in the Northern Hemisphere and the first day of summer (summer solstice) in the Southern Hemisphere.