What will the new year bring for exciting things to see in the night sky? Read on to learn more about the events happening in 2018.

The New Year gets off to a fantastic start with a Full Moon, Super Moon, and Blue Moon all occurring on January 31st. Not since 1866 has the world witnessed one of these rare events. 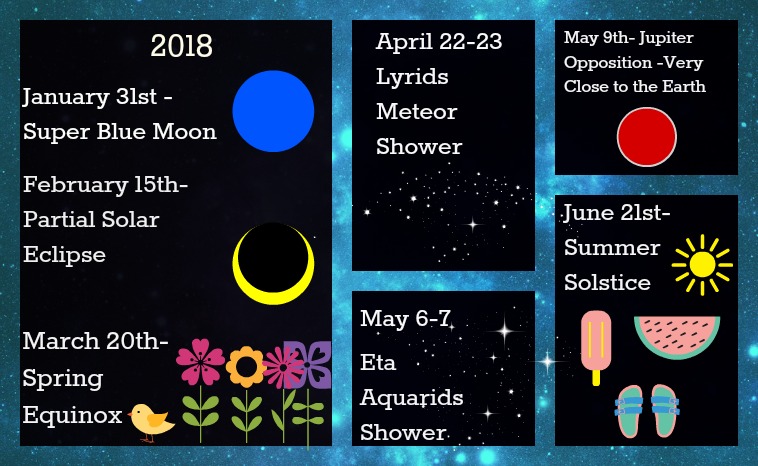 April 22, 23 – Lyrids Meteor Shower. The Lyrids is an average shower, usually producing about 20 meteors per hour at its peak. It is produced by dust particles left behind by comet C/1861 G1 Thatcher, which was discovered in 1861. The shower runs annually from April 16-25. It peaks this year on the night of the night of the 22nd and morning of the 23rd.  Best viewing will be from a dark location after midnight. Meteors will come from the constellation Lyra but can appear anywhere in the sky.

May 6, 7 – Eta Aquarids. The Eta Aquarids can produce up to 60 meteors per hour at their peak. Although most of the action happens in the Southern Hemisphere, the Northern Hemisphere can reach about 30 meteors per hour. Observed since ancient times, the dust particles come from Halley’s Comet.  The shower runs annually from April 19 to May 28. It peaks this year on the night of May 6 and the morning of the May 7. You can see the showers best from a dark location after midnight. Furthermore, the meteors will come from the constellation Aquarius but can appear anywhere in the sky.

May 9 – Jupiter at Opposition. Jupiter will be at its closest approach to Earth, and its face will be fully illuminated by the Sun. It appears brighter than any other time of the year and visible all night long. This is the best time to view and photograph Jupiter and its moons. If you have a good pair of binoculars you can see  Jupiter’s four largest moons. They will appear as bright dots on either side of the planet.

June 21 – June Solstice. The June solstice occurs at 10:07 UTC. The North Pole of the earth will tilt toward the Sun, which will have reached its northernmost position in the sky and will be directly over the Tropic of Cancer at 23.44 degrees north latitude. This marks the first day of summer in the Northern Hemisphere, and the first day of winter in the Southern Hemisphere.