Irish born astronomer Jocelyn Bell Burnell made an amazing discovery in the late 1960s. Read on to learn more about what she found in space.

We can never assume that astronomers have discovered all of the mysteries of space. Although our technology has advanced scientific knowledge exponentially, the fact remains that mysteries still exist.

In 1967, an Irish born astronomer named Jocelyn Bell Burnell noticed a pulsing object detected by a chart recorder. A chart recorder is an electromechanical device that records an electrical or mechanical input trend onto a piece of paper (the chart). What she initially thought was a “bit of scruff” on the paper was, in fact, a rapidly rotating neutron star.

After a star collapses, the remaining core is called a neutron star. They are the smallest stars with dense masses. Scientists base a star’s mass as compared to the mass of our sun. They believe that the mass of the more significant star before it exploded was equal to 10-29 solar masses. Once it explodes, the remaining neutron star has a mass of between 1.4  and three solar masses.

“Neutron stars pack their mass inside a 20-kilometer (12.4 miles) diameter. They are so dense that a single teaspoon would weigh a billion tons — assuming you somehow managed to snag a sample without being captured by the body’s strong gravitational pull. On average, gravity on a neutron star is about 2 billion times stronger than gravity on Earth. In fact, it’s strong enough to significantly bend radiation from the star in a process known as gravitational lensing, allowing astronomers to see some of the back sides of the star.” (Space.com) 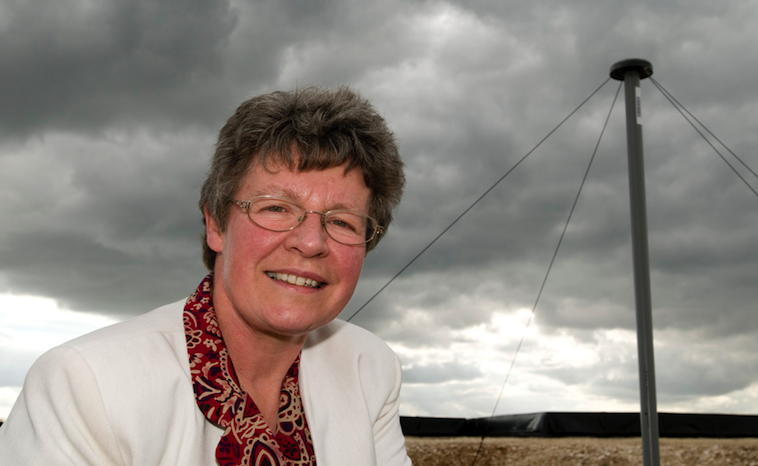 Jocelyn worked with two other astronomers and had argued that the markings on the chart recorder were indeed stars. Several years passed and the Nobel Prize committee awarded the Nobel Prize in physics to the two men that had denied her observations. By and large, it appeared unfair to many that she had not also been awarded the prize along with the men. However, Jocelyn pointed to the fact that as a student she did not deserve the award. She believes that awarding a Nobel Prize to a student should only occur under an extraordinary set of circumstances.

“demarcation disputes between supervisor and student are always difficult, probably impossible to resolve. Secondly, it is the supervisor who has the final responsibility for the success or failure of the project. We hear of cases where a supervisor blames his student for a failure, but we know that it is largely the fault of the supervisor. It seems only fair to me that he should benefit from the successes, too. Thirdly, I believe it would demean Nobel Prizes if they were awarded to research students, except in very exceptional cases, and I do not believe this is one of them. Finally, I am not myself upset about it – after all, I am in good company, am I not!”

As a lifelong Quaker, Jocelyn Bell Burnell has remained active in her church duties. Unlike many astronomers that deny the existence of a higher being, Jocelyn wrote a book called A Quaker Astronomer Reflects: Can a Scientist Also Be Religious? In her book, she describes astronomers’ current understanding of the Universe we live in. Moreover, she talks about how she combines her Quakerism and her science. Her beliefs remain based on her Quaker background but also apply to other religions.

Jocelyn Bell Burnell solved the mystery of the Pulsar Star and currently teaches at the University of Oxford.