Archeologists have discovered weapons and jewelry made from iron that appeared during the bronze age. Where did these iron artifacts come from? Read on to find out who or what made these items.

Archeologists often describe the time period of the ancient people they study by the tools they used. Each time a civilization advanced it often resulted from a new discovery of metal forging weapons and tools. The Bronze Age refers to the time period in China from around 3000 BC to 2400 BC. The Bronze Age started in Europe around 2300 BC and lasted to about 500 BC. Before bronze tools, these civilizations used a stone to craft their weapons and tools.

They produced spears, daggers, swords and axes, jewelry, statues and even toys during this time. As the civilizations advanced they eventually started making iron tools and weapons. How did they learn how to make iron? 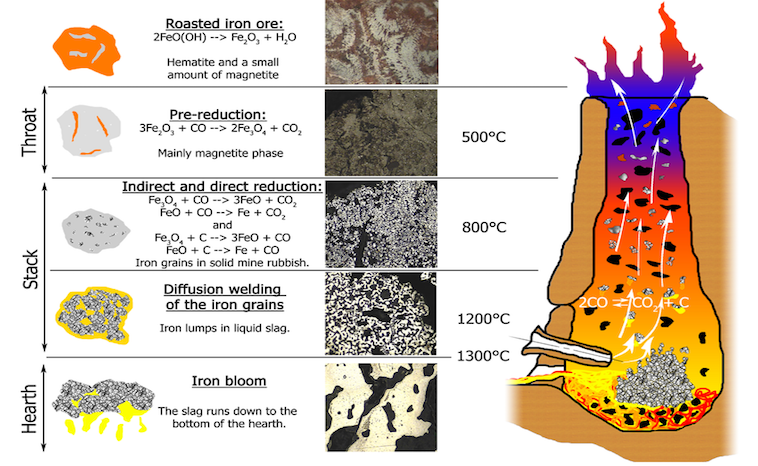 The process involved in making iron is rather difficult. Ancient people used a bloomery furnace to make iron. Bloomery furnaces smelt iron in a reduction process where the iron never becomes liquid. If the furnace gets too hot the iron liquefies and becomes cast iron. Cast iron cannot be worked into tools because it is too brittle. The furnace produces a ‘bloom’, which is similar to a big sponge, with glass filled channels running through it. Once the bloom is made, a blacksmith starts working it, while it is still hot, to hammer the glass out, leaving just the iron. Before the Bronze age ended archeologists have discovered artifacts made of iron. Due to the difficulty in making iron they have always wondered how the people made these iron artifacts.

A mineralogist from Pierre and Marie Curie University in France believes that these early iron tools came from meteorites. Albert Jambon set out to discover whether these ancient artifacts came from man or space. Jambon looked at a Syrian Ax made around 1400 BC and a set of bracelets from 700 BC. He also compared items that he knew came from meteorites like the dagger blade found in King Tut’s tomb to the ax and bracelets.

Using a special tool that avoids moving the objects, Jambon looked at the ratios found with the iron. Iron is comprised of Iron (FE), Cobalt (CO) and Nickel (NI). The modern composition of these materials from smelting gives us proper ratios to determine if the iron came from a man or outer space. Jambon found that these artifacts came from meteorites and not from the smelting process of making iron. Their ratios of FE, CO, and NI, were closer to a meteorite and not manmade.  Jambon’s analysis opens up the possibility of tracking when and where the first smelting operations happened.

Although early civilizations eventually figured out the smelting process to make iron, these rare artifacts came from meteorites. It took hundreds of years for men to figure out how to make iron strong enough to forge weapons, jewelry, and tools. This iron period lasted right up to the industrial revolution which combined iron with carbon to make steel. Each discovery propelled civilization forward to the modern age where we enjoy the conveniences brought by steel.