Researchers have announced that metallic asteroids may have formed from volcanoes spewing forth iron. Two research teams have reached this conclusion independent of each other. The research remains based in theory, but NASA plans to launch a mission in 2022 to investigate further.

Although asteroids would look gray to your eyes, they are classified according to their albedos and spectroscope colors.

Albedo-the proportion of the incident light or radiation that is reflected by a surface, typically that of a planet or moon.

Over the years the theory of asteroid formation has changed. Scientists now think that asteroids have existed since the beginning of the solar system. As planets tried to form they faced collision from other planets. How fast do things typically travel in the solar system? A typical velocity in space reaches speeds 10 km/s (22,000 mph). Some planetesimals formed due to gravitational influences and later became planets. However, during this process of formation, some planetesimals were stripped of their layers. As a consequence,  these objects were left with their molten inner cores.

Planetesimals- small planets a body that could or did come together with many others under gravitation to form a planet. 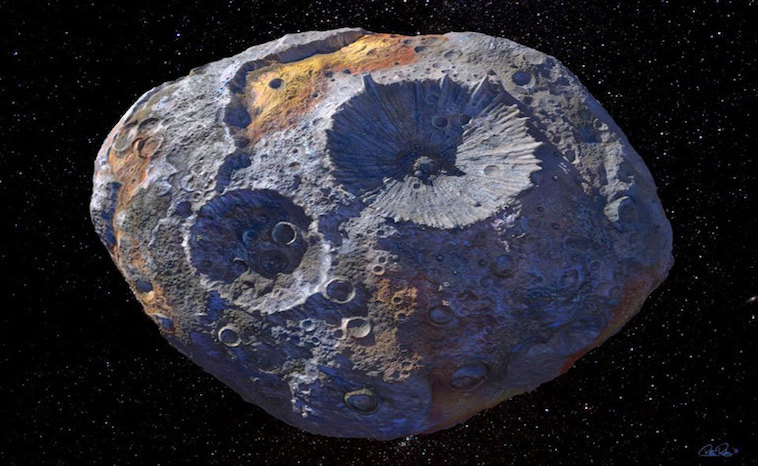 If their hypothesis is correct, then what happened to the molten inner cores? Researchers believe that one of two thing things happened. The asteroid either cooled from the outside in or from the inside out. Planetary scientists Francis Nimmo and Jacob Abrahams at the University of California Santa Cruz set up models to test each theory. At this point, they looked at it cooling from the outside in.

“I’d never thought about it before, but it makes sense because you have a buoyant liquid beneath a dense crust, so the liquid wants to come up to the top” said Francis Nimmo.

As the asteroid quickly cooled a thin crust formed around the liquid center. This sealed the hot liquid and created pressure. As it kept cooling more pressure condensed onto the core. The researchers contend that under pressure a fissure or break would have pushed through the thin crust. What materials inside the core would react to this pressure?

“If it’s mostly pure iron, then you would have eruptions of low-viscosity surface flows spreading out in thin sheets, so nothing like the thick, viscous lava flows you see on Hawaii,” exclaims Abrahams.

“At the other extreme, if there are light elements mixed in and gases that expand rapidly, you could have explosive volcanism that might leave pits in the surface.”

Did iron flow from a volcano on asteroids to form their surfaces?

In 2022, NASA will launch mission Psyche and sending a probe to an asteroid with the same name. The Psyche asteroid remains one of the largest asteroids in the asteroid belt. It has a diameter of 210 km (130 miles) and may have a nickel-iron composition. It will take four years for Psyche to reach Psyche. This mission will hopefully give confirmation to the scientist’s hypothesis. Furthermore, we will learn more information on how asteroids formed.