HOW FAST DOES IT TRAVEL?

The International Space Station travels in orbit around Earth at a speed of roughly 17,150 miles per hour (that’s about 5 miles per second!). This means that the Space Station orbits Earth (and sees a sunrise) once every 92 minutes! It Orbits the Earth 16 Times a Day.

WHICH WAY DOES IT ORBIT?

The ISS is prograde meaning it travels in the direction of the Earth’s rotation.

HOW HIGH IS IT ABOVE THE EARTH?

The average distance in miles above Earth’s surface the ISS orbits is 250 kilometers. On a clear day, the ISS is easily visible to the naked eye from the ground.

WHO OWNS THE ISS?

The International Space Station is a co-operative program between Europe, the United States, Russia, Canada, and Japan for the joint development, operation and utilization of a permanently inhabited Space Station in low Earth orbit 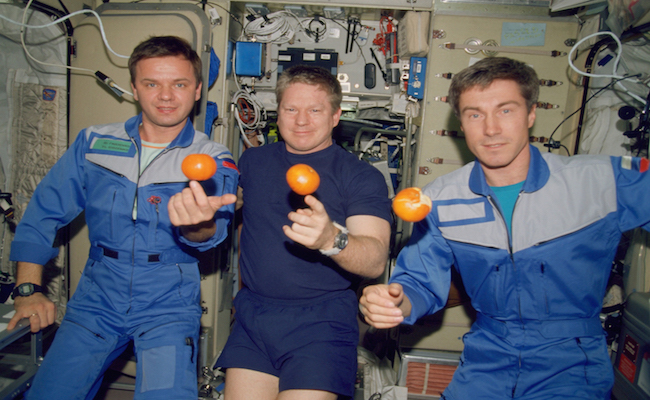 ASTRONAUTS ON THE ISS

HOW MANY PEOPLE ARE USUALLY ON THE ISS?

There are three people permanently on the station, and the crew that rotates out periodically. When the shuttle goes up, it carries up to seven additional people so they can have as many as ten at a time when the shuttle is there. And when Russian ship goes up, usually there are two people aboard, so there are either three, five or ten people on the station. It is permanently manned at a level of three.

HOW LONG DO THE ASTRONAUTS STAY ON THE ISS?

HOW DO THEY CLEAN THEIR CLOTHES?

Astronauts aboard the ISS incinerate their dirty laundry through atmospheric reentry. ISS astronauts are instructed to wear their underwear for up to a week before changing to a clean pair. Of course, the temperature-controlled atmosphere of the ISS is much cleaner than Earth’s, and the lack of gravity means clothes don’t stick to their bodies as much. But astronauts do have to exercise frequently to prevent muscle atrophy.

DO ASTRONAUTS SHOWER ONBOARD THE ISS?

The space station has a full body shower unit. When astronauts want to take a shower, they step into a cylindrical shower stall and close the door. They then get themselves wet and wash up just like you would on Earth. However, due to weightlessness, the water droplets and soap don’t flow downwards into a drain, they float about. Astronauts use a suction device to get rid of the waste water.

WHEN WILL IT BE DECOMMISSIONED?

HOW MUCH LONGER WILL THE ISS BE USED?

The American Section of the ISS is funded through 2024.

WHAT WILL HAPPEN TO THE ISS WHEN IT IS DECOMMISSIONED?

The 420-ton ISS presents a major threat if its orbit is allowed to deteriorate unmanaged.

“After the ISS completes its mission, we’ll have to sink it,”

“It can’t be left in orbit because it’s too complex and heavy. It could produce a lot of junk.” Such debris could either remain in orbit, presenting a threat to future satellites and spacecraft. If it crashes to Earth, allowing that it survives re-entry, it may threaten people. Most likely, they will send up one of the European Space Agency’s Automated Transfer Vehicles. This vehicle will be equipped with enough fuel to push the station into a planned re-entry, most likely over the Pacific Ocean.

WHAT WILL REPLACE THE ISS?

NASA officials have recently indicated that it is unlikely that NASA would finance a replacement space station once the ISS is retired. They are looking instead to the private sector to develop commercial facilities that NASA could utilize in the future.

The International Space Station has nearly completed its mission to serve as a space laboratory. We hope that further space stations will be developed to continue in research and development of space science.