In 1954, Ufologist George Van Tassel began building a dome structure called the Integratron in Landers, California. He claimed that aliens directed him to build the unique structure. Read on to learn more about why aliens wanted it built and what its purpose is today.

George Van Tassel spent 18 years building a structure he called the Integratron. He claimed that telepathic communications with aliens directed him to build it to help people. Why were aliens telling him to build the structure? According to Mr. Van Tassel, they wanted to heal Earth’s people at the cellular level.

Furthermore, Howard Hughes employed him as a test pilot for at Hughes Aviation. He was married and had three children. In 1947, he moved his family to the Mojave desert to run an airport after the death of a friend named Frank Critzer.

Mr. Critzer lived under Giant Rock in the Mojave desert. For those unfamiliar with Giant Rock, it is what it describes. Giant Rock is located near the town of Landers, California. It rests as a giant, seven-story high, freestanding boulder. Mysteriously, Mr.Critzer died in a room located below Giant Rock shortly after an encounter with authorities.

In the 1950s, UFO enthusiasts began visiting Giant Rock. Mr. Van Tassel started hosting group meditations in 1953 in a room underneath Giant Rock. In that same year, he stated the occupant of a space ship from the planet Venus woke him one night. Furthermore, the alien invited him on board his space ship. At that point, both verbally and telepathically the alien gave him a technique for rejuvenating the human body. Four years later, Mr. Van Tassel began work on the Integratron. 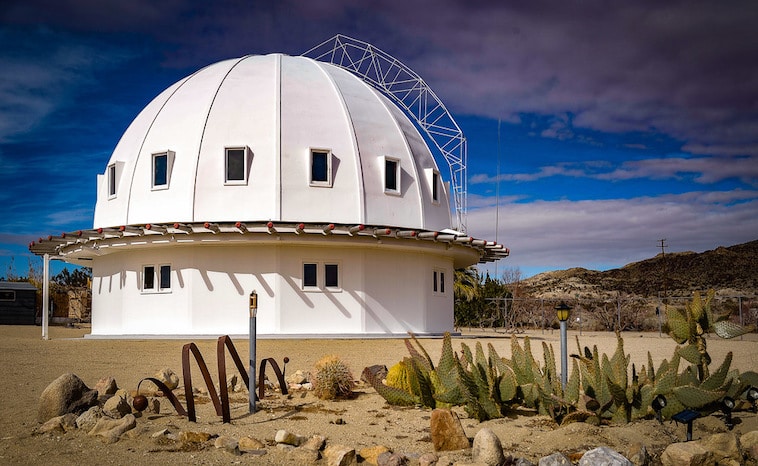 The Integratron is an impressive structure. According to the website, the all-wood dome stands 38 feet tall and spans 55 feet in diameter. It sits three miles from Giant Rock. The design was reportedly inspired by the Moses’ Tabernacle, the writings of Nikola Tesla, and telepathic directions from extraterrestrials.

How does the Integratron rejuvenate one’s body? Mr. Van Tassel stated that it was built on an intersection of powerful geomagnetic forces. Indeed, magnetometers read a significant spike in the Earth’s magnetic field in the center of the Integratron. Not only does the dome structure focus on the geomagnetic forces, but also amplifies the Earth’s magnetic field. Mr. Van Tassel claimed that this electromagnetism affected human cells. Each cell responds to a specific electromagnetic frequency. Furthermore, cells can recharge themselves when the right frequency is reached. 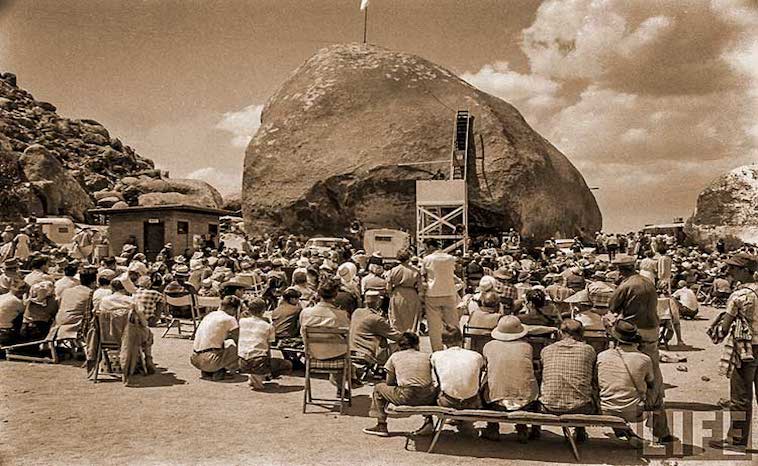 His idea soon became popular. He held conventions at Giant Rock for over twenty years. In addition, prominent UFO authors and Ufologists spoke at his conventions, drawing thousands of believers. Their participation helped pay for the construction of Integratron, which was completed in 1959. Mr. Van Tassel died suddenly in 1978. Unfortunately, several years passed, and the Integratron was forgotten.

Mr. Van Tassel’s construction of a dome built to appease Venutian aliens seems far fetched. The FBI never reached conclusions about his alien encounters. However, people claim that Integratron does indeed help them feel better. Far fetched or not, Mr. Van Tassels Integratron has stood the test of time.