NASA’s Ingenuity helicopter continues to help the Perseverance Rover team with its flights. Read on to learn more about its latest flight.

NASA’s Ingenuity helicopter has completed its ninth flight on Mars. Each flight has helped NASA view more of the Martian landscape. This information has provided needed reconnaissance information for its Perseverance Rover. The rover sits at the eastern edge of the region called “Séítah.” This region has sandy ripples that pose challenging terrain issues for wheeled vehicles like the rover.

Ingenuity Helicopter Filling in the Blanks

To date, the farthest distance that Ingenuity has traveled occurred on July 5th. During its 9th flight, Ingenuity flew 2,051 feet (625 meters). The flight lasted 166 seconds, which became the longest flight to date. “Flight 9 was not like the flights that came before it. It broke our records for flight duration and cruise speed. Furthermore, it nearly quadrupled the distance flown between two airfields.” said Teddy Tzanetos from JPL NASA.

But, what really set the flight apart was the terrain that Ingenuity had to negotiate during its 2 minutes and 46 seconds in the air. It traveled to an area called “Séítah” inside Jezero Crater. This area on Mars poses a travel issue for the Perseverance rover due to its sandy terrain.  Therefore, engineers chose this area for Ingenuity to fly over for research purposes. They wanted to see if Ingenuity could target an area and get a close-up of the terrain before Perseverance arrives. Ingenuity passed the test with flying colors. 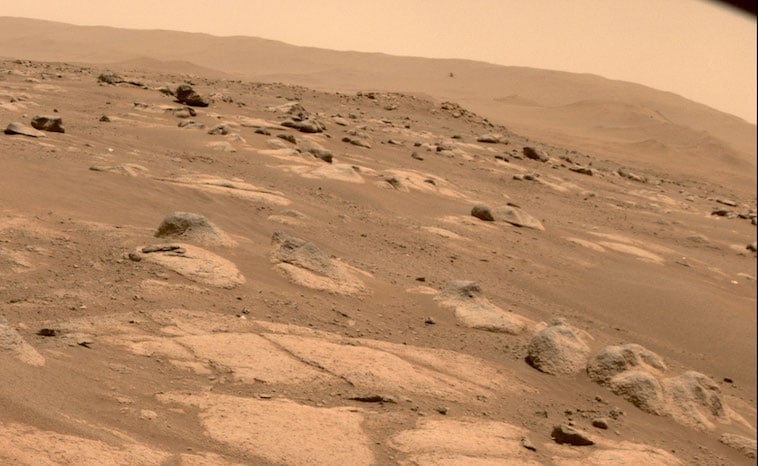 It will take time for photos to come back to NASA from the Ingenuity flight. However, it will send back color images that Perseverance’s scientists are looking forward to studying. They believe those images will show rock outcrops. Further, they want to know what caused an area of fractures in the rocks. They call these fractures “Raised Ridges.” Scientists believe that an ancient subsurface habitat may be preserved beneath the fractures.

“Finally, we’re hoping the color images will provide the closest look yet at ‘Pilot Pinnacle.’ This location featuring outcrops that some team members think may record some of the deepest water environments in old Lake Jezero,” said Tzanetos. “Given the tight mission schedule, it’s possible that they will not be able to visit these rocks with the rover.  So, Ingenuity may offer the only opportunity to study these deposits in any detail.”

Scientists also want to explore other places. “Along the way, we hope to acquire reconnaissance imagery of places that we cannot go,” said project scientist Ken Farley. “And we are also using the helicopter to develop terrain meshes. These meshes may allow rovers to drive across landscapes that they cannot actually see from their mast-mounted cameras.” The teams have expressed enthusiasm for the success of Ingenuity. The lessons learned from these efforts will provide significant benefits to future mission planners.