If the Earth Stopped Spinning….

Hollywood loves to create movies that show the devastation of Earth and its inhabitants through natural disasters. Sometimes space aliens come by and reek havoc, but most often an earthquake or Tsunami take out parts of the globe. But, what if the Earth stopped spinning ? Would anything survive? Scientists believe several things would occur, and that certainly removes the possibility that you and I would survive.

The Earth spins at 465 meters per second at the equator. Due to several billion years of spinning, the Earth maintains the shape of a ellipsoid or flattened sphere. What would happen to the oceans if the Earth stopped spinning? The oceans would migrate toward the poles. Due to the fact that polar regions do not have the capacity to hold this much water, the land masses in those areas, would become submerged. The water would cover Siberia, Canada, and northern pars of North America.  The equatorial region would see the emergence of a large mega-continent. As the water continued to flood toward the poles, the Earth would end up divided by two mega oceans. North America holds the largest resource of freshwater in 5 Great Lakes. Huron, Ontario, Michigan, Erie, and Superior. These would disappear and become consumed by the ocean. 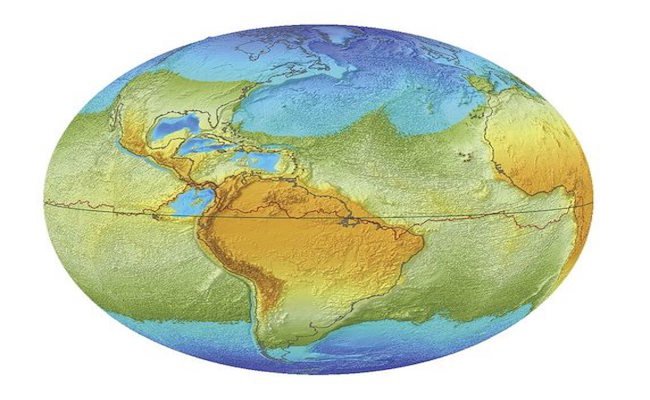 Imagine driving in a car at 70 mph and suddenly you slam into a brick wall. If you were not wearing a seat belt, your body would continue to travel at 70 mph and slam into that same brick wall at that speed. With the Earth spinning at 1000 mph/1600km per hour, if it instantly stopped, you would continue to travel at the same speed. You and everything around you, not bolted to the earth would fly through the air. You will not fly into space though, because you would need thrust to boost you through our atmosphere. The Earth would compress more into the shape of a sphere and it’s magnetic field might go away. While theories exist that the inner core rotates faster than the outer core, the stoppage of spinning may result in solar winds causing erosion and fires.

Currently wind travels across the earth parallel to the equator. These winds, along with the spinning, keeps temperatures here on Earth fairly consistent. It is cold up north and down south and warm in the middle. A stoppage to Earth’s spin would result in wind traveling from the equator directly to the poles. We would receive 6 months of daylight and warm temperatures over 212 °F /100°C. Lakes and rivers would boil away and the new mega-continent at the equator would be the hottest location on Earth. One day would equal 365 days. One half of the year would have daylight and the other half night time.

Thankfully the chances of the Earth coming to a complete halt are slim and none. The perfect rotation that we all will live will let us continue to enjoy everything the Earth has to offer. We can actually be envious of the people that will have 25 hours to their day, in a million years, as the Earth continues to slow its rotation. Thankfully, everything works beautifully on our little planet.