Have you ever heard of a volcano that erupts ice instead of molten lava? Read on to learn more about the ice volcano on the dwarf planet Ceres.

The dwarf planet Ceres located in the asteroid belt between Mars and Jupiter was initially thought to be an asteroid. In 1801, Giuseppe Piazzi discovered the “stellar object” and named it “Ceres Ferdinandea,” after the Roman and Sicilian goddess of grain and King Ferdinand IV.

In his journal, he wrote:

The light was a little faint, and of the color of Jupiter, but similar to many others which generally are reckoned of the eighth magnitude. Therefore I had no doubt of its being any other than a fixed star. In the evening of the second I repeated my observations, and have found that it did not correspond either in time or in distance from the zenith with the former observation, I began to entertain some doubts of its accuracy. I conceived afterward a great suspicion that it might be a new star. The evening of the third, my suspicion was converted into certainty, being assured it was not a fixed star. Nevertheless, before I made it known, I waited till the evening of the fourth, when I had the satisfaction to see it had moved at the same rate as on the preceding days.

Incidentally, he announced that he had discovered a comet instead of a planet. Why? He did not have a chance to observe Ceres for a long period. During his observation, the sun’s glare blocked any further observation.

In 2006 scientists classified Ceres as a dwarf planet. Why did scientists do this?

The sheer mass of Ceres makes it far bigger than the other asteroids in the belt. To put it into perspective, the dwarf planet Pluto has 14 times more mass than Ceres. NASA used the Dawn Observer to study the planet. First, it found that it did not have an atmosphere. Second, it does not have any moons orbiting it. Third, Ceres does not have any rings. 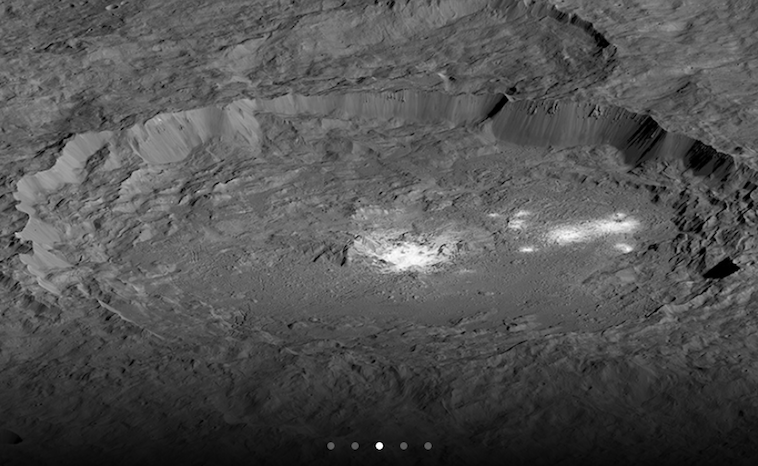 Ceres has special volcanos on its surface called Cryovolcanoes. A Cyrovolcanoe does not spew molten lava, but instead water, methane, or ammonia. Once those chemicals come to the surface, the air temperature changes the components to ice. When researchers looked at Ceres, they found it covered in ice volcanoes. How did they identify the volcanoes? They looked for dome shaped features larger than 10 kilometers. As a result, they found 22 domes on the planet. Scientists figured that the domes were around 50 percent ice by volume.

They estimated that Ceres spews around 10 thousand cubic meters per year of ice. That amount of ice would fill half of the Goodyear blimp. Unlike Earth’s volcanoes that impact surrounding areas, Ceres volcanoes have limited impact. Other cryovolcanos do exist in the solar system. Scientists have seen ice geysers on Enceladus and Triton. They suspect that Pluto and Titan may also have these icy volcanoes.

The bright spot located inside the Occator Crater is believed to be a Cyrovolcanoe. With the most recent eruption 4 million year ago, researchers believe it may erupt again soon.

With the Dawn Observer nearing the end of its mission, the hope is that it may capture the eruption of the volcano inside the Occator Crater. We shall wait and see.