How does a Rocket Launch?

Have you ever watched a rocket launch?  What causes the rocket to go upward? Read on to learn more about the science behind rocket launches.

Rockets play important roles in our daily lives. Everything from cell phone communication to cable television has been simplified due to rockets taking satellites into space. What makes a rocket launch? A rocket works in the same manner as a ballon. Walls compress the air inside. Due to the compression, the air pushes back, balancing the pressure both in and out. Releasing the nozzle allows air to escape, which then propels the ballon forward away from the escaping air. Rockets use gas, either in liquid or solid form, to move forward.

In order to understand the science behind the launch we must consider Newton’s three laws of motion.

Considering the first law, the rocket needs to go from resting at the launch pad to moving. Even though the rockets remains in a resting state unseen forces work against it. The force of gravity pulls the rocket downward while the surface of the launchpad work at pushing it up. The rocket remains balanced. Once the engines ignite, the thrust from the rocket unbalances those forces and the rocket travels upward. 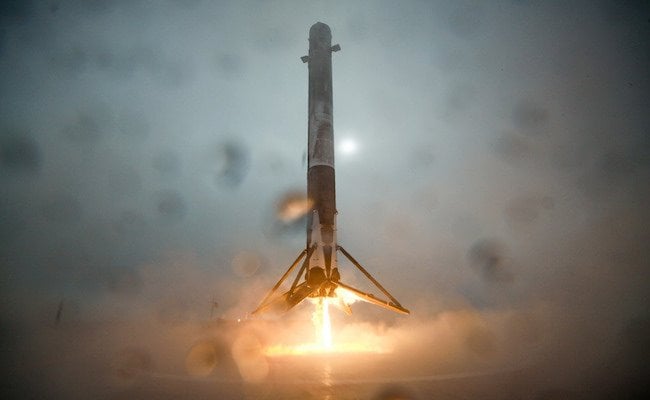 What Happens in Space?

As the rocket leaves the gravitational pull of the Earth it will travel in a straight line as long as it is balanced. When it becomes pulled on by another gravitational source it will become unbalanced and curve its travel path. When a satellite orbits the Earth, the orbit remains constant and curved because it is unbalanced. The satellite must travel fast enough in that orbit to fight off friction. Friction would cause it to lose speed and fall back to Earth.

In order for the rocket to reach Earth’s low orbit it must reach the right speed. The rocket must travel over 28,000 km per hour. If it reaches a speed of 40,250 km per hour it has the ability to travel into deep space. Attaining space flight speeds requires the rocket engine to achieve the greatest action force possible in the shortest time. In other words, the engine must burn a large mass of fuel and push the resulting gas out of the engine as rapidly as possible. The pressure created by the controlled explosion taking place inside the rocket’s engines equals the force. That pressure accelerates the gas one way and the rocket the other.

For every action there is always an opposite and equal reaction. In the case of our rocket this action and reaction occurs at the time of the launch. A rocket carries engines, propellants, tanks, and payloads on board. Essentially a lot of mass weighs down the rocket. When the rocket expels gas out of its engine (action), it pushes on the gas, and the gas pushes back on the rocket (reaction). In order to lift the rocket off the launch pad, the thrust from the engine has to push past the weight of the rocket. It starts out slowly, but increases in speed as it loses mass. The engines continue to fire (action) and propel the rocket forward (reaction).

The Chinese invented rockets around 1100 AD to use in warfare. Rockets today help us live and enjoy most of our day to day activities. The ability to communicate, navigate, and increase our knowledge links directly to rockets taking objects into space. You may not have the ability to watch a rocket launch up close and in person, so we have included the link to the NASA Launch Schedule. Try and take a moment to watch a rocket launch. You now know how it all works.