Harlow Shapely-Size of the Galaxy

Until early in the 20th century no one knew that we lived inside a galaxy. That began to change around 1920 when an astronomer named Harlow Shapely discovered the enormity of our star system. Considered one  of the biggest turning points in modern astronomy, Shapely’s research led to the conclusion that other galaxies exist besides our own.

Astronomers identify Star Clusters in two different types, open clusters and globular clusters. Shapely began his research on the star system by noticing that more than half of all globular clusters lie in or near Sagittarius. Most open star clusters scatter along the Milky Way.  Shapely assumed that the orbital motion of these clusters was controlled by the gravitation of the entire star system. He concluded that they lie somewhere near Sagittarius and that our sun was not at the center. 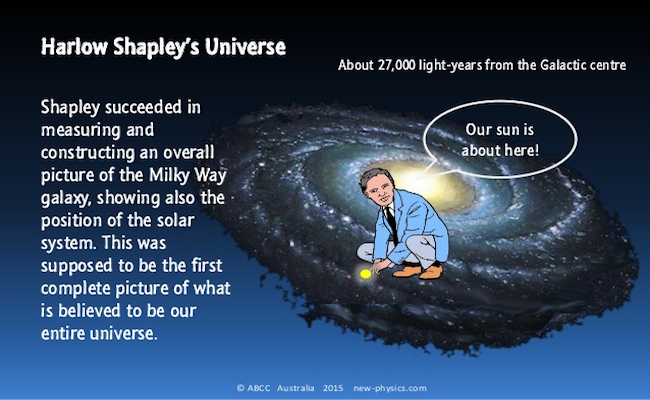 Shapely and other astronomers knew that Cepheid variable stars could help. By using the luminosity of the giant stars, distance could be determined. However, there was a problem. Cepheid stars are very rare and their parallax unmeasurable. Therefore Shapely used proper motion to measure the stars.

The more distant stars tend to have a smaller proper motion. Shapely found 11 Cepheids with measured proper motions and used a statistical process to find their average distance.

In 1912, American astronomer Henrietta Swan Leavitt made an important discovery. She noticed a relationship between period and luminosity in Cepheid variable stars.  The period of the cycle of fluctuation in brightness was highly regular and determined by the actual luminosity of the star. Using Levitt’s information, Shapely determined absolute magnitudes which also represented true luminosities. Once he calibrated all the period-luminosity relations to the stars, he could use that to find the distance to any cluster which had those variable stars.

The Center of the Galaxy

By taking a series of photographic plates over a number of nights Shapely proved his initial theory. He plotted the directions and the distances to the globular clusters on graph paper and found they formed a great swarm. The center of the swarm lay many thousands of light years in the direction of Sagittarius. This discovery led other astronomers, like Edwin Hubble, to find other galaxies and more.

Each discovery made, each clue revealed, continues to solve the mystery of our universe and pushes us to look for more clues. Thanks to Henrietta Swan Levitt and Harlow Shapely, we now know other galaxies exist.