Every day astronomers capture a magnificent event in space called Gamma Ray bursts. Gamma rays are a high energy form of light. The rays are produced when the gas around the object reaches billions of degrees. Therefore, when an object reaches a billion degrees, it shines naturally. By comparison, supernova rays are Xrays, but only millions of degrees hot. Theses bursts are bright and full of electromagnetic energy.

All of the rays are still light. Light comes in many forms. It comes in x-rays, microwaves, radio waves, and more. People are blind to most forms of light. We see a tiny bit of light that is available. Light is made of photons and travels through space.

The inverse square law of light says that the intensity of light drops as one moves farther and farther away. The law is applied to the area around a sphere. For example, the light coming from the Sun is represented by photons coming from its sphere. As the photons move away from the sphere, they cover a larger and larger area. The area of the sphere is related to the square of the distance away from the object. 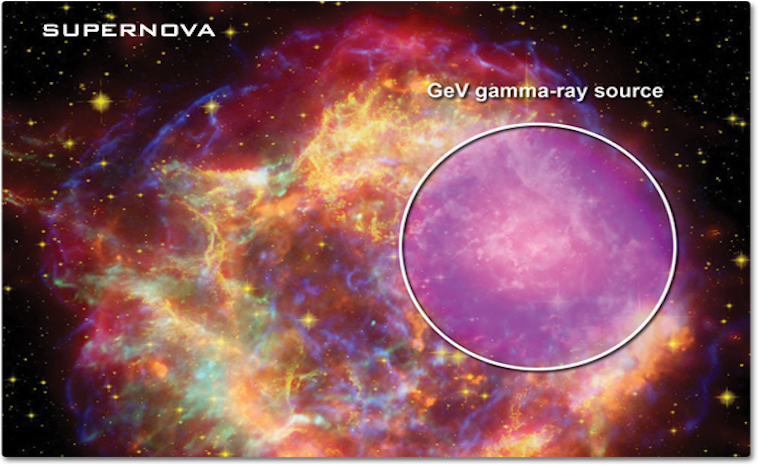 The gamma rays that scientists see lie millions upon millions of miles from Earth. The amount of distance the light travels is nearly beyond comprehension. Yet, the radiation from the gamma rays does not reach Earth because of the distance.

Scientists say that the amount of radiation given off by these daily explosions when it reaches the Earth is nearly the same as a snowflake hitting the ground.

Some telescopes can pick up gamma-ray sources from 7 billion light-years away. This means that an explosion happened 7 billion years ago. Therefore, it has taken that light 7 billion years to get to us. Aside from gamma rays, those explosions can put out light visible to the naked eye.

Supernova vs. Gamma Ray B

A supernova explosion that may occur within 20 light-years of Earth would not damage the Earth with radiation. However, if a gamma-ray burst went off anywhere in our galaxy, the Earth would be in trouble. When a gamma-ray explodes the light, it emits travels in beams. Scientists believe that as a star collapses, its strong magnetic force pushes the light to the top of its pole. For example, the Earth has a north pole and south pole. If the Earth exploded, the light would travel up or down to the poles and out into a beam. As long as the Earth does not lie in the path of the beam, we should be safe.

Do stars exist in our universe that may explode as a gamma-ray burst? Yes, astronomers have identified several stars. Eta Carinae is one of the brightest and massive stars in the Milky Way. The good news is that its pole does not face the Earth. Yet, scientists do not know how wide the beam is and whether it could still hit the Earth.

Keep in mind that these gamma-ray explosions happen in space every day. However, we have not yet been hit, and it seems unlikely we will see one hit the Earth in our lifetime.