1n 1984 NASA astronaut Bruce McCandless II flew untethered from the spacecraft Challenger. What kind of equipment did he use? How long did he fly? Read on to find out more about flying in space by jet propulsion.

In December of 2017, astronaut Bruce McCandless II passed away. He was known for becoming the first NASA astronaut to ever fly in space untethered from his spacecraft. He was famously photographed in 1984 flying with a hefty spacewalker’s jetpack, alone in the cosmic blackness above a blue Earth. McCandless traveled more than 300 feet away from the space shuttle Challenger during the spacewalk. He sped around the Earth at 17,500 miles per hour. McCandless said he wasn’t nervous about the historic spacewalk. What kind of equipment did he need to fly in space untethered?

NASA designed the Manned Maneuvering Unit (MMU) for a specific type of mission: satellite rescue. All earlier maneuvering units had been planned for experimental missions. For example, NASA used them to test new technology.  When NASA developed the reusable Space Shuttle, they introduced an operational, mission-oriented maneuvering unit. This operational unit was used three times in 1984— on the tenth, eleventh, and fourteenth flights of the Space Shuttle. Bruce McCandless II, who first used the unit in space, NASA’s Charles E. “Ed” Whitsett, Jr., and Martin Marietta’s Walter W. “Bill” Bollendonk all used it. As a matter of fact, all three men helped develop the MMU. 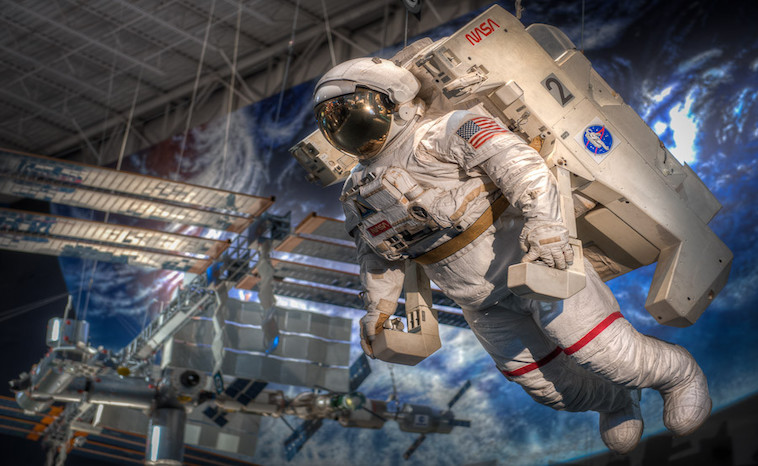 How Did the Unit Work?

New features of the shuttle maneuvering units included fingertip control and storage in the cargo bay. Once in the MMU, an astronaut controlled position (forward/backward, left/right, up/down) with the left hand and rotation with the right hand. Tolerance of extreme temperatures was achieved in part by painting the MMU white to keep the temperature below 150° Fahrenheit. It also used electrical heaters to keep components above their minimum temperature limits. An astronaut could recharge the propulsion system at the shuttle’s cargo bay from airborne support equipment called the flight support station. This support station also provided storage of the MMU when not in use.

After a safety review following the Space Shuttle Challenger disaster, the MMU was judged too risky for further use. Ultimately, they decided that the activities planned for the MMU could work by using manipulator’s arms or by tethering. NASA also discontinued using the Shuttle for commercial satellite contracts, and the military abandoned the use of the Shuttle.

Thanks to the efforts of men like Bruce McCandless II, we know that we can fly untethered in space. Hopefully, one day, NASA may see a reason to use the MMU and put it back into service.