For centuries people have argued over the existence of the lost city of Atlantis. Evidence indicating a lost city called Atlantis has never completely solved the mystery. Therefore, a myth remains. However, others believe that it was located deep in the Atlantic Ocean, lost forever in its depths.

Ancient people around Plato said he made the story up to protect the image of Athens. While other sources close to Plato said, his account was real with evidence held by the ancient Egyptians. What has remained a mystery is the location of this lost city. Some speculate that it resides in the depths of the Atlantic Ocean. Furthermore, researchers have yet to uncover definitive artifacts from the lost city.

The ancient scholars that came after Plato wrote about a giant island in the middle of the Atlantic Ocean. This island had other islands near it according to the writings of Proclus. “That an island of such nature and size once existed is evident from what is said by certain authors who investigated the things around the outer sea. For according to them, there were seven islands in that sea in their time.”

Accordingly, account after account places Atlantis in the middle of the Atlantic Ocean, until the 16th century. Then, famous explorers Sir Francis Bacon and Hernan Cortez made the case that Plato was indeed referring to North America. Furthermore, the islands referred to by Proclus could easily be the Bahamas off the southern coast of Florida.

What happens if the story of Atlantis is true along with the account of a large island in the middle of the Atlantic Ocean. Could both stories be true? As we find with other stories in history, some ideas get combined whether intentional or not by the storytellers. 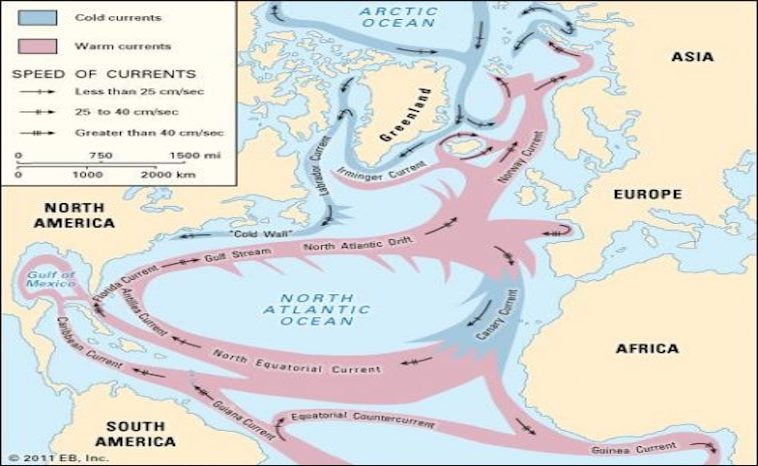 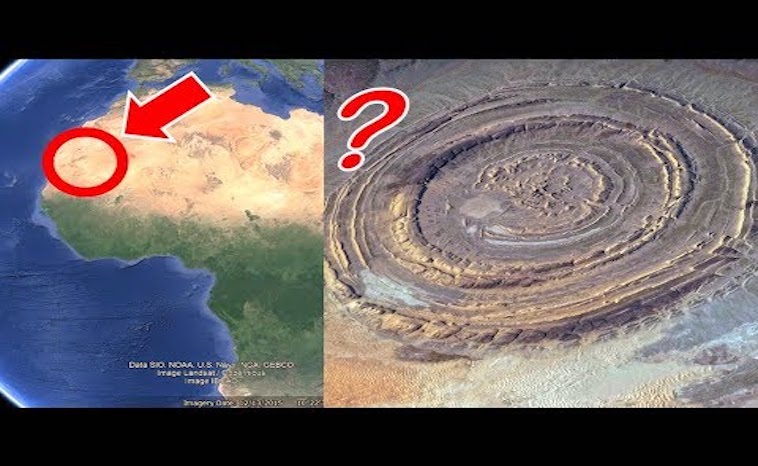 What we notice from the above pictures is that if we travel out of the Richat area, it puts us into an ocean current that leads straight the Bahamas.

Nowhere else on Earth does the description of Atlantis match more than the Eye of Africa (Richat). The diameter of the Eye of the Sahara measures 23.5km, according to Google Map’s measuring tool and Atlantis was said to measure 127 Stadia, or in today’s terms that is 23.49km.

According to Plato: “There were alternate zones of sea and land encircling each other, there were two of land and three of water.”He also wrote about a mountain to the north of the city “and encompassing a great plain of an oblong shape in the south.” In his video, “Ancient Map Proves The Lost City of Atlantis”, the host points to the mountains around the Richat as the mountains of Atlantis “A quick study of the topography of this area does indeed show a high, mountainous, ridge to the north with a great oval shaped plain to the south.

To find out if this new theory is correct scientists need to explore the Richat for physical evidence. Furthermore, if an entire city lived there, they should have the ability to recover artifacts.

What do you think? The lost city of Atlantis resides in the Eye of Africa. Or merely another conspiracy theory that keeps people wondering?