In the year 2000, miners found the Earth’s largest crystal cave. Read on to learn more about this strange and deadly place.

The Naica Mine, located in the Mexican state of Chihuahua, is home to one of the strangest places on Earth. Back in the year 2000, miners working in the lead, zinc, and silver mine discovered towering crystals. Some of the towering crystals measured four feet in diameter and fifty feet in length. The discovery became known as Cave of the Crystals.

Cave of the Crystals

A 1,000 feet below the surface sits a large cavern of giant selenite crystals. They are the largest natural crystals ever found on Earth.

The Cave of the Crystals is a horseshoe-shaped cavity in limestone. Its floor is covered with perfectly faceted crystalline blocks. In addition, huge crystal beams jut out from both the blocks and the floor. The crystals deteriorate in air. As a result, the Naica Project attempted to document the crystals before they deteriorated further visually.

In 2006, researchers and scientists formed the Naica project to descend into the cave and learn more. Prior to that, it was nearly impossible to conduct research. The extreme heat and humidity prevented human exploration. The air temperatures reached up to 58 °C (136 °F) with 90 to 99 percent humidity. After 10 minutes, a person has to leave the area. 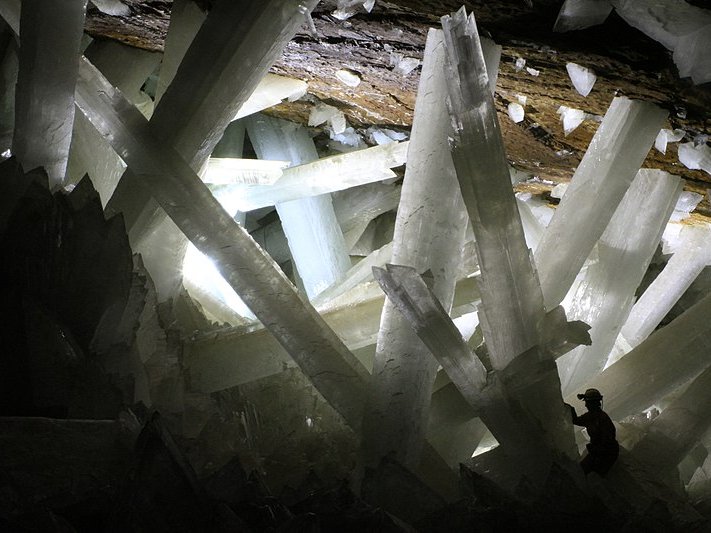 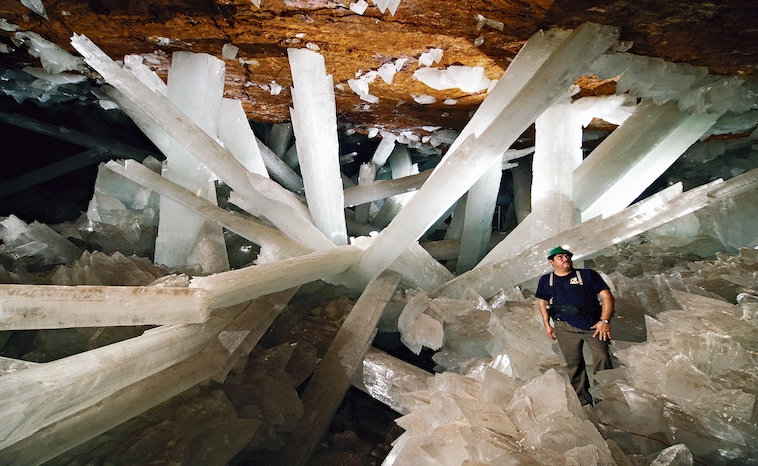 Survival in the Cave

When temperatures reach over 115 °F and humidity nears 100%, the human body cannot cool itself. The sweat needed to leave the body to cool could not escape. Therefore, the body cannot cool. Prior to 2006, researchers went into the cave and stayed at a maximum of 10 minutes. After 10 minutes, they came out of the cave, and their vital signs were taken. Each of them had dangerously high blood pressure and temperatures. They planned another trip, but that one would have to include special equipment.

In order to survive in the cave, researchers had to develop life-saving suits. They developed refrigerated suits and cold breathing systems. Researchers created special caving overalls fitted with a mattress of refrigeration tubes and placed all over the body and connected to a backpack. The backpack weighed in at a hefty 44 lbs (20 kg) It contained a reservoir filled with cold water and ice. The cooling provided by melting ice was sufficient to provide about half an hour of movement. In 2008, they went back better prepared.

The scientists hoped to discover the age of the crystals and what made up their composition. The crystals were made from the same thing found in drywall, namely gypsum. It takes crystals that big a long time to grow. To get to that size, the crystals need two things. They need the gypsum to be submerged in water and maintain a temperature of 120 °F.

The temperature inside the cave is not the only deadly thing. The crystals are searing hot to the touch and razor-sharp. However, they are soft, like human fingernails.

Age of the Crystals

Stein-Erik Lauritzen from the University of Bergen, Norway, performed uranium-thorium dating. This type of dating led him to determine the maximum age of the giant crystals. He dated them to that of about 500,000 years old. With some math, the researchers determined that it took 1 million years to reach their size.

In 2015, the mining company that owns the mine allowed it to re-flood. Currently, humans do not have access to the cave. Hopefully, one day in the coming years, they will re-open it for further study.