Remember the time you met a new friend? It was exciting to find out what you both had in common. Recently scientists discovered some new planets that may be similar to our planet. Do you think they will look like the Earth? Will life be able to survive there? Read on to find out about these 7 new planets and what they may have in common with Earth.

Scientists have discovered in the Constellation Aquarius seven Earth sized planets orbiting a star named Trappist-1. Trappist-1 is considered an ultra cool dwarf star about the size of Jupiter and produces light 2000 times fainter than our sun. It is 40 light years away from Earth and is believed to be about 500 million years old. Scientists made the discovery in 2015 in Chile, but did not reveal the exciting news until February of this year. 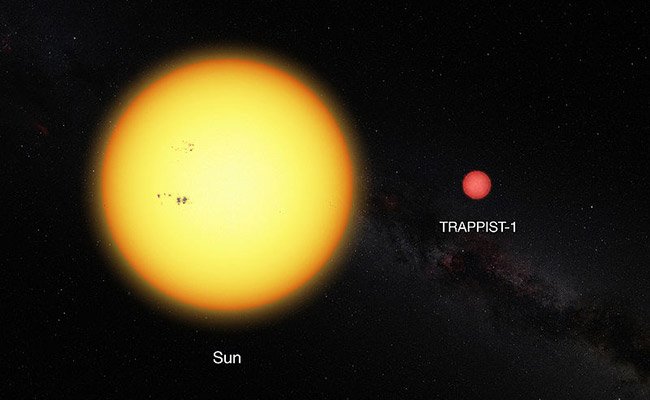 How did they find it?

As planets pass or transit in front of their star they seem to dim. When scientists focused on Trappist-1, they were able to see this dim and measure it. The measurement revealed how much of the star’s light each transit blocked from Earth’s view. Scientists already knew the radius of our Earth, and were therefore able to calculate the size of the new planets. That calculation revealed planets similar in size to Earth.

Are they similar to the Earth?

The density of the planets are thought to be rocky. The planets’ masses range from about half to 1.5 times that of Earth. To figure that out, the researchers looked at the way the six inner planets tugged on each other. The mass and size data then allowed them to calculate the planets’ densities. Their findings suggested that the inner six are rocky, and the furthest planet is possibly icy.

How are they different?

The ultraviolet level emitting from the sun is low, but the radiation is high, and that could mean that it could strip any Earth like atmosphere from the inner two planets. Since the planets are close to the sun and one another, scientists believe they are “tidally locked”.

Our moon is tidally locked to the Earth. That is why we see the same side of the moon all the time. The problem with the planets being “locked” is that one side of the planet is always facing the sun and therefore hot, while the other side is always dark and consequently cold. The side that remains consistently hot would produce severe winds resulting in large temperature fluctuations on the planet.

These planets orbited their star every 1.5 days, 2.4 days, and four Earth-days. This orbits makes them between 20 and 100 times closer to their star than Earth is to the sun.

What about their atmosphere?

The Hubble Space Telescope will focus on looking for atmospheres. If methane and water are detected, it may indicate the presence of life. Scientists are cautious when predicting habitable atmospheres because light from the Ultracool Dwarf stars can vary. Nasa will launch the James Webb Space telescope in 2018 as it looks to get more information on this new system.

Are they in the Goldilocks Zone?

The Goldilocks Zone refers to the life sustaining distance to our star. The perfect distance means that it is neither too hot, nor too cold to support liquid water – thought to be a key ingredient for life

Three planets, 1e, 1f, and 1g are in the perfect distance from their sun for any water to stay in liquid form. The first three, 1b,1c, and 1d, may be too close and any water on their surface would rapidly evaporate. The furthest planet, 1h, may be frozen.

With new telescopes and scientists learning more about where to locate these systems, future planets similar to Earth may be discovered. Exciting possibilities to find the potential for life on other planets may still be discovered in our lifetime.