NASA has announced plans to send a new rotorcraft type explorer to Saturn’s moon Titan, in 2026. Read on to learn more about this new explorer.

In NASA’s neverending search for the basic building blocks of life, they are sending a new spacecraft to Titan in 2026. This spacecraft, which appears more like a helicopter drone, will spend seven years flying towards Titan. Titan is larger than the planet Mercury and is the second largest moon in our solar system. As it orbits Saturn, it is about 886 million miles (1.4 billion kilometers) away from the Sun, about ten times farther than Earth. It is so far from the Sun, it’s surface temperature is around -290 degrees Fahrenheit (-179 degrees Celsius). It’s surface pressure is also 50 percent higher than Earth’s.

Much of what NASA knows about Titan comes from the Cassini spacecraft. It dropped a Huygens probe into the atmosphere of Titan back in 2005. Huygens found that Titan’s surface is composed mainly of ices of water and methane. Images made by the descending probe showed dark drainage channels suggesting that liquid methane falls as rain. However, no direct evidence of liquid methane was detected as the probe descended. Later radar images made by the Cassini orbiter detected what appear to be lakes presumably containing liquid methane. Infrared images suggest the presence of methane volcanoes that replenish the methane in the atmosphere. Scientists believe that below the icy surface are lakes of water. 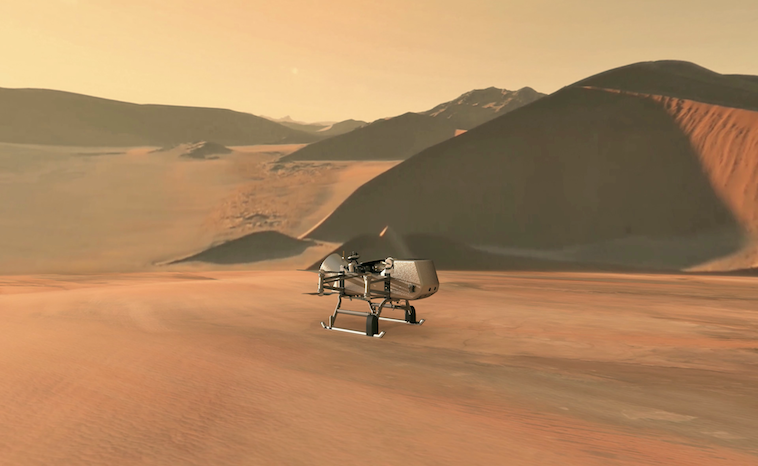 The Dragonfly mission plans to look at the astrobiological components of Titan. The rotorcraft will fly to dozens of promising locations on Titan looking for prebiotic chemical processes common on both Titan and Earth. Using its eight rotors, Dragonfly will vertically take off and touch down at multiple locations.  Scientists believe that Titan has a chemical and biological composition similar to Earths. To determine if they are correct, Dragonfly will explore diverse environments. These environments vary from organic dunes to the floor of an impact crater. Measuring the compositions of materials in different geologic settings will reveal how far prebiotic chemistry has progressed. Furthermore, scientists hope they find amino acids which build proteins. They also hope to find pyrimidines which are used to encode DNA.

Dragonfly has eight rotors for the off chance that one of the rotors breaks during its mission. Each of the eight rotors will be about 1 meter in diameter. The aircraft will travel at about 10 m/s or 36 km/h and climb to an altitude of up to 4 km. Titan has low gravity, low winds, and a thick atmosphere that allows for efficient rotor propulsion. NASA designed Dragonfly to operate under space radiation and temperatures averaging −179.2 °C or −290.5 °F.

NASA believes that Dragon will travel significant distances. They plan to power it by using a battery that will be recharged by a Multi-Mission Radioisotope Thermoelectric Generator (MMRTG) during the night. This type of generator converts the heat from the natural decay of radioisotopes into electricity.  The rotorcraft will be able to travel tens of kilometers on every battery charge and stay aloft for a few hours each time.

Its payload will have several spectrometers, a camera, and geophysics and meteorological packages. With this new space explorer, NASA believes it has the potential to learn more about Saturn’s giant moon.

“With the Dragonfly mission, NASA will once again do what no one else can do,” said NASA Administrator Jim Bridenstine. “Visiting this mysterious ocean world could revolutionize what we know about life in the universe. This cutting-edge mission would have been unthinkable even just a few years ago, but we’re now ready for Dragonfly’s amazing flight.”