Dr. Serena Auñón-Chancellor is a doctor that became an astronaut. Read on to learn more about her mission in space.

In 2018, Dr. Serena Aunon-Chancellor spent 197 days onboard the International Space Station. While onboard she performed research on a variety of scientific experiments. What started Dr. Auñón-Chancellor on the path to becoming an astronaut?

However, this was not her first experience around space ideas. When Auñón-Chancellor was 15 years old, she had her first taste of “space.” She ran mock space missions as a flight surgeon at Space Academy inside the historic US Space & Rocket Center in Huntsville, Alabama. It’s a hands-on camp where students learn how astronauts train and perform space expeditions. “It solidified that this is what I wanted to do with my life,” said Dr. Aunon-Chancellor.

In November 2011, she completed astronaut candidate training. This training comprised of general astronaut education as well as robotics, spacewalks, physiological training, and more. In 2018, she became part of flight 56/57 on the ISS. The crew contributed to hundreds of experiments in biology, biotechnology, physical science and Earth science aboard the International Space Station.  Investigations were led to new cancer treatment methods and algae growth in space. 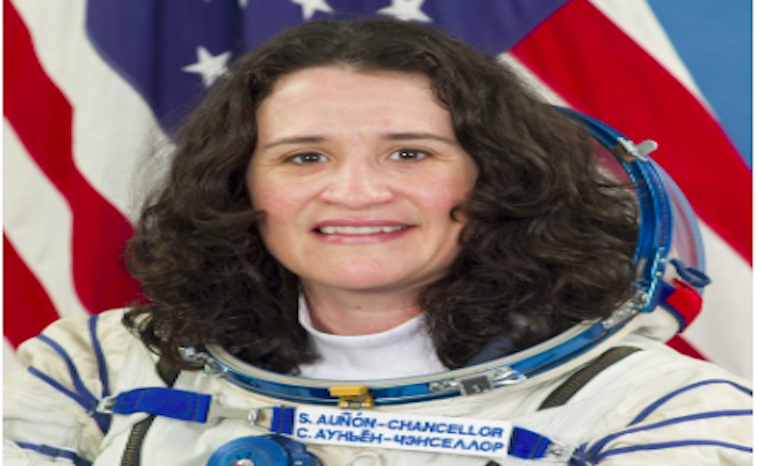 Dr. Aunon-Chancellor examined biological samples like bovine and human sperm for a fertility study. This study will help scientists understand if human reproduction could possibly happen in outer space.

She also helped to crystallize a protein, called leucine-rich repeat kinase 2. That protein is present in patients with Parkinson’s disease. (During the study she observed that the protein crystals grew larger and more uniformly in microgravity than they do on Earth.) Analyzing the protein’s structure could help scientists better understand the role it plays in Parkinson’s disease. This could lead to improved medicines for the disease.

Dr. Auñón-Chancellor also studied endothelial cells (EC), the cells that line the blood vessels. This research will help determine if ECs grown in microgravity can serve as a good model system for cancer therapy trials. “I was most proud of the cancer research that we did because what it showed us was that cells that grow in microgravity like to grow,” she says.

She is confident that what’s learned in space will be useful back on the planet below. “Pretty quickly, even within the next three to five years, they could help us provide cures for cancer down here on the ground,” she says.

Dr. Auñón-Chancellor has a simple but powerful message for students with similar background: Don’t limit yourself. “My father came from a very humble background. He came to this country in 1960 (from Cuba) and had nothing,” she says. “You can start with nothing and end up with everything. It’s all about what’s up here, and what you envision yourself doing, and what you want to do.”

She is an inspiration to future astronauts everywhere.