Have you ever experienced a hailstorm? Pebbles of ice loudly hitting the roof of your home or car can seem very unusual. What would you think if instead of ice, diamonds fell from the sky? It may be possible on Neptune. Read on to find out how.

A recent discovery by researchers have allowed them to create “diamond showers” in a laboratory. They wanted to know if the massive blue planet Neptune could produce showers of diamonds in its atmosphere. Scientists believe that Neptune formed very slowly. Due to its slow formation, it developed a core of heavy elements, a mantle of slushy ices and rocks, and a deep hydrogen rich atmosphere.

Neptune’s internal heat may be generated partly by radioactive decay in its core and partly by dense material sinking inward. Laboratory experiments showed that temperatures and pressures deep in Neptune’s atmosphere could decompose methane. What they wanted to know was if they could simulate this and produce diamonds. The released carbon from the methane decomposing, may form diamond crystals as large as pebbles. Scientists think that a continuous flow of diamonds falling into a planet’s interior would release gravitational energy and help warm the planet. This process may be the source of Neptune’s internal heat. With the heat flowing outward toward Neptune’s surface, convection may produce a magnetic field, and help create atmospheric circulation.

Researchers can determine the chemical make-up of Neptune based on its mass and its radius. As previously stated, the planet contains heavy elements. The interior of Neptune consists of a solid core swathed in thick layers of “ice”. This ice is mostly made up of hydrocarbons, water and ammonia. For a long time, astrophysicists have speculated about the extreme pressure beneath the surface. They believe that more than 10,000 kilometers beneath the surface of Neptune pressure splits the hydrocarbons. Consequently, the splitting causes diamonds to form, which then sink deeper into the planet’s interior.

In cooperation with colleagues from Germany and the United States, researchers at the Helmholtz-Zentrum Dresden-Rossendorf (HZDR) have managed to demonstrate ‘diamond showers’. Using the ultra-strong X-ray laser and other facilities at the Stanford Linear Accelerator Center (SLAC) in California, they simulated the conditions inside the cosmic giant. For the first time ever, they observed the fission of hydrocarbon and the conversion of carbon into diamonds in real time.

How Did They Do It?

The exact process has never been observed in experiments on Earth before now. Previous experiments failed because they could not replicate the pressure and the atmosphere.

Using a special kind of plastic, polystyrene, they exposed it to conditions similar to Neptune. The polystyrene consists of a mix of carbon and hydrogen. By driving two shock waves through the samples they compressed the plastic. A powerful optical laser combined with an -X Ray source produced enough pressure and temperature (5,000 Celsius) to compress the plastic. As a result, researchers watched tiny diamonds form as shock waves passed through plastic. Showing them what they had long suspected, that it rains diamonds on Neptune. 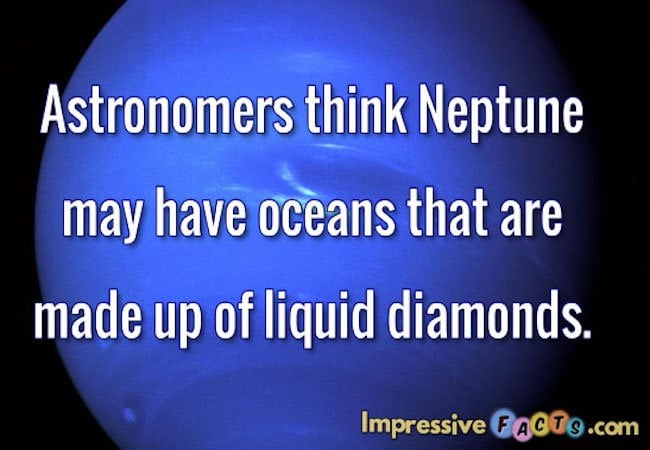 In conclusion, this work will benefit planetary scientists seeking to understand the conditions inside our own local ice giants. In addition, those studying extrasolar planets will benefit as well. It will allow researchers to create better models for a deeper understanding of these planets. Furthermore, they will learn more about the weather and the planet’s energy source.

Why the Stars Above Us Twinkle- Or Do They?

A stick, a rope, and the sky: What is a gnomon?