750 light years away sits the darkest planet NASA has ever discovered. Why is it so dark? Read on to learn more about this dark planet.

As planets orbit their sun, many of them reflect the light hitting them. For instance, our moon reflects the light of the sun which provides some light on the Earth at night time. 750 light years away NASA discovered a dark planet in 2006. One light year is about 6 trillion miles. Located in the constellation Draco, this planet orbits a sun named Keppler-1.

TRES-2b, a super-sized gas giant, orbits closely to Keppler-1 at 3 million miles. In our solar system, Jupiter reflects more than a third of the sunlight reaching it. Scientists believe that the bright clouds of ammonia covering Jupiter enhance the reflection. With it orbiting so closely one would imagine that TRES-2b would reflect the light from Keppler-1. However, due to high temperature and surface gases, the planet absorbs the light.

Keppler-1’s intense light heats TrES-2b to a temperature of more than 1,800° Fahrenheit. At this temperature ammonia clouds cease to exist. “Instead, its exotic atmosphere contains light-absorbing chemicals like vaporized sodium and potassium, or gaseous titanium oxide. None of these chemicals fully explain the extreme blackness of TrES-2b.” (NASA 8/11) 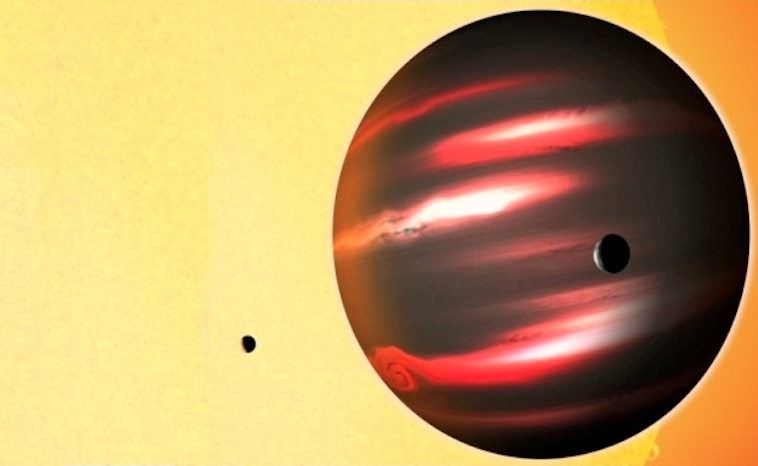 Look at a black painted surface. The black paint absorbs all light and does not reflect it. At 1800° F the planet burns hot. However, it’s not entirely pitch black. “It’s so hot that it emits a faint red glow, much like a burning ember or the coils on an electric stove.”(NASA 8/11)

Therefore, they were able to detect visible light coming from the planet itself. However, the light showed small fluctuations and proved that TRES-2B was indeed very dark. Scientists compare the darkness as dark as coal.

Do Other Dark Planets Exist?

Have scientists discovered other dark planets? They believe that other similar stars undoubtedly await discovery. In 2016, astronomers think they discovered a dark planet sitting at the edge of our solar system. It is believed to be ten times more massive than the Earth. “The planet hasn’t yet been seen by scientists. Instead, they have found it by watching the way that dwarf planets and other objects in the outer solar system move — their orbits seem to be disturbed by something huge but hidden sitting out there.” (Independent 01/2016)

Whether it is a dark planet like TRES-2B or a reflective planet like the Earth, the point remains that scientists still have a lot to uncover. Our universe remains quite the mystery.  Black holes and huge suns keep our eyes looking at the nighttime sky. With ever increasing technology we continue to learn more and see more. In addition, scientists may discover a dark planet closer to us and eventually learn what makes it so dark.