Researchers and scientists have moved CubeSats forward in space exploration with advanced technology. Read on to learn more about new missions and new propulsion systems.

CubeSats are a class of research satellites called nanosatellites. Originally designed to provide Earth observation or amateur radio communication, they have taken on new roles. Today, CubeSats study coastal ecosystems, collect neutrons in space, and assist other satellites in their missions. With these new missions, their propulsion systems have undergone expansion with new technologies designed to take them further into space.

Over the last several years, scientists have found new ways to maneuver and charge these small satellites. The European Space Agency has a new CubeSat it plans to launch by 2024. The Miniaturised Asteroid Remote Geophysical Observers (M-Argo) will be the smallest spacecraft to perform its own independent mission in interplanetary space. Its mission is to visit an asteroid after leaving Earth’s orbit. Scientists want to use M-Argo to study the shape and mass of the asteroid. Furthermore, they want to know what minerals make up its surface. They believe that the discovery of certain minerals may help future space missions.

M-Argo will ride along on a launch vehicle until it leaves Earth’s orbit. Once it leaves Earth’s orbit, it will tumble through space for a while. After a certain amount of time and distance, engineers will turn on its control thrusters. The control thrusters, made from 12 tiny gas jets, will perform two tasks. First, it will help M-Argo stop tumbling. Second, it will stabilize its orientation.

The ESA chose an electric propulsion system. It has a Xenon ion engine powered by a large steerable solar array.  Xenon is a colorless, odorless gas. It is very unreactive. The Cubesat will utilize information from its sun sensor to rotate and track the sun. This helps to power the CubeSat on its mission toward an asteroid.  The electric propulsion system will leave a glowing blue xenon plume in its wake.

Not only have scientists created a way to use an electric propulsion system to power CubeSats, but they have also figured out a way to use water for propulsion. 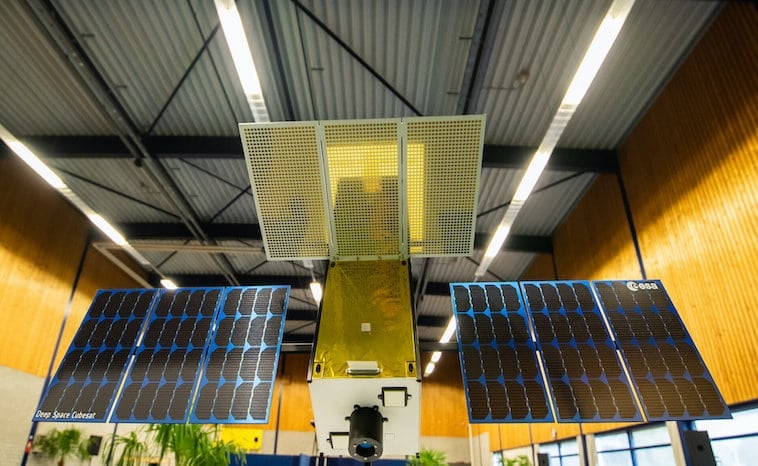 Water has plenty of advantages going for it as a propellant. Most obviously, it is not volatile or toxic. This makes it much easier to handle than conventional rocket fuel. CubeSats have not had their own rockets because of the potential for the rocket to explode. They are usually housed next to larger, more expensive satellites in the payloads of rockets. CubeSat designers avoid adding dangerous propellants to their small satellites.

This has held many CubeSats back from going deep into space. However, the Xenon electric engines have helped overcome that obstacle. Researchers believe that water may be the next best propellant.

What makes water such a special propellant is that it is completely stable under normal conditions. Furthermore, it can also be split to create hydrogen and oxygen. Those two elements are two of the main components of normal rocket fuel. This split is accomplished by a process known as electrolysis. It separates oxygen and hydrogen molecules from the water and then one another. As a result, each element can be funneled into a rocket nozzle and exploded to push the CubeSate in a given direction.

As researchers develop these new technologies, we may one day see CubeSats travel to the furthest reaches of our universe.