Dream Big! That is the inspiration behind Elon Musk and his company Space X. He has demonstrated his pioneering spirit for years. Today, Crew Dragon, flew into space with two American astronauts on board. This achievement comes from years of hard work and dedication of thousands of people. This launch is historic because it marks the first time a private company has launched astronauts into space.

On May 30th, 2020 at 3:22 EST, American astronauts Robert Behnken and Douglas Hurley launched into space aboard Crew Dragon. Powered by Space X‘s Falcon 9, Crew Dragon left Cape Canaveral on time and without incident. Minutes later, the rocket separated and began its descent back to Earth.

“This has been a long time coming,” NASA Administrator Jim Bridenstine said in post-launch remarks on NASA TV. “It’s been nine years since we’ve launched American astronauts on American rockets from American soil, and now it’s done. We have done it.”

While Crew Dragon left the confines of Earth’s gravity, Falcon 9 landed on a drone ship in the middle of the ocean.

The two astronauts joined NASA in 2015 to train on both the Crew Dragon and Boeing’s CST-100 Starliner vehicles. This allowed them to provide input regarding the flights. Their input helped them prepare for the mission today.

Crew Dragon has its own fuel and means of propulsion. Over the next 19 hours, it will make a series of burns to steer it to the International Space Station. The two men will also manually pilot it at one point, to test the controls.

The Crew Dragon is scheduled to dock with the ISS at about 10:29 a.m. Eastern May 31, 19 hours after launch. After docking, Bob Behnken and Doug Hurley will remain on the station for up to four months. Behnken and Hurley both joined the NASA astronaut corps in 2000. 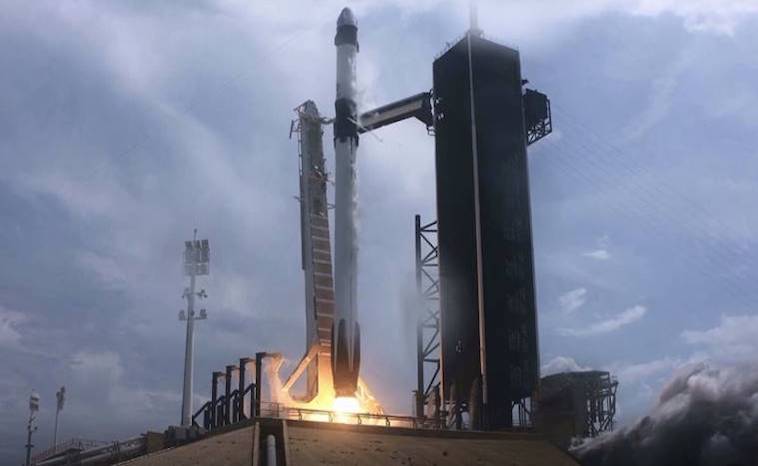 NASA then started the commercial crew program in 2010 with a series of funded Space Act Agreement initiatives to SpaceX and other companies. In 2014, Boeing and SpaceX won Commercial Crew Transportation Capability (CCtCap) contracts to complete the development and testing of their commercial crew vehicles and for initial flights to the ISS. SpaceX’s award was worth $2.6 billion.

SpaceX flew the Crew Dragon spacecraft for the first time in March 2019 on the Demo-1 mission. It did not have a crew on board for that trip. However, it went well and plans moved forward to send astronauts. Today’s successful launch allows Space X the ability to take contracts for manned space flights.

Today is a proud moment not only for Elon Musk but for Gwynne Shotwell as well. Ms. Shotwell is the President and COO of Space X.